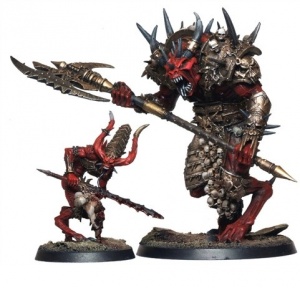 Uraka Az'baramael, also known as the Warfiend, is a Daemon Prince of Khorne. He leads a Daemonic warband known as Uraka's Head-Hunters.[2]

Uraka was once a man. In the ancient history of Terra he led wars of conquest. His horse-bound armies were a scourge, killing and plundering at his command. Upon taking one city by siege, he ordered the entire populous massacred and thousands were beheaded. This act would seal Uraka's fate, and he offered his immortal soul to Khorne during the bloodshed. Becoming known as the "Warfiend", upon his death ten years later the War God was so pleased with Uraka that his soul was summoned to his realm. Before the Throne of Skulls, the War God issued Uraka a challenge: defeat a Bloodthirster in single combat and be rewarded with the honor of Daemon Prince. Fail, and he would become a Chaos Spawn.

Uraka accepted the challenge, selecting a great beheading poleaxe as his weapon. Eventually decapitating the great Bloodthirster, Khorne was pleased and rewarded Uraka with Daemonhood. To this day, he still carries his great executioner axe. On Vraks, Uraka and his Daemonic legion would clash with the Grey Knights, eventually being banished back into the Warp. However Uraka survived and still dwells in Khorne's realm, eager to return to the Materium and fight again.[1]