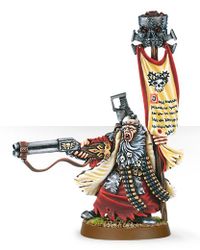 Uriah Jacobus, the Protector of the Faith, was a missionary of the Ecclesiarchy who in his missionary duties, traversed the lightly inhabited region of space west of Bakka. By the age of fifty he had brought fifteen human worlds into the fold of the Imperial Cult.

He became a legendary figure while on the medieval world of Solstice. The now-famous Jacobus came to the world in order to bring the worship of the Emperor of Mankind, first spending three years gaining knowledge of the inhabitants of Solstice, before beginning to introduce the precepts of Imperial worship into Solstice's own disorganised religion.

On meeting with the ruler of one of the world's kingdoms, Jacobus spied a horrific four-armed statue of the realm's god of death. Recognising the four armed statue as the unmistakable mark of Genestealer infiltration, Jacobus persuaded the more friendly rulers of the planet to align with each other and attack the alien-subverted kingdom. As soon as Jacobus arrived at the head of the loyal army the terrible truth became apparent as his army was attacked by swarm of Genestealers. Managing to smash through a screen of human Brood Brothers, his knights reached the heart of the cult, slaying both the Patriarch and Magus. Thrown into disorientation and confusion at the sudden loss of their leaders, the rest of the cult were massacred in a final charge. The battle made Jacobus a legendary figure.

After Solstice, Jacobus managed to convert another six planets before dying of a lung-destroying virus on the Death World of Gorang.[1]