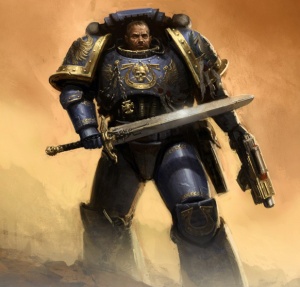 Uriel Ventris from the cover of The Chapter's Due}}

Uriel Ventris is the current Captain of the Ultramarines 4th Company. He is descended from 1st Company Veteran Sergeant Lucian Ventris, who died in Macragge's northern Polar Fortress during the Battle for Macragge.[4b]

Born on Calth in 876.M41, Uriel Ventris was raised on an underground farm and worked upon the land since the day he was able to walk. At age six, Ventris was recruited by the Ultramarines and trained at the Agiselus Barracks on Macragge; he graduated in 889.M41 and went on to complete his training at the Fortress of Hera.[Needs Citation]

Nine years later, he became a full-fledged Marine in the Scout Company, and was finally inducted into the Fourth Company in 909.M41. During his training, he discovered he had a natural talent for war and swore to become the best warrior Macragge had ever seen.[4x]

He rose gradually to become a Veteran Sergeant of the Fourth, under Captain Idaeus.[1]

At some point before he attained his Captaincy, Ventris was seconded to the Deathwatch, the Chamber Militant of the Ordo Xenos that specialized in hunting xenos threats.[4x][5]

At the Battle of Bridge Two-Four on the planet Thracia, Idaeus sacrificed himself to help capture the objective, leaving Ventris in command and giving him Idaeus' power sword.[1]

Shortly thereafter, Ventris was confirmed as the new Captain of Fourth Company by Chapter Master Marneus Calgar. His first mission as Captain was to put down a rebellion on the Imperial world of Pavonis.[2a] It was on this mission that the Ultramarines encountered the Night Bringer, newly awakened from its millennia-long slumber.[2x]

During a boarding action of the space hulk Death of Virtue, Ventris and the Fourth were attacked by hordes of genestealers. Astropaths aboard the Strike Cruiser Vae Victus detected psychic disturbances from a Tyranid Hive Fleet (a tendril of Leviathan) moving towards Tarsis Ultra.[3][4a]

Sworn to honour an ancient oath pledged by Roboute Guilliman, to defend the people of Tarsis Ultra, Ventris, on Lord Calgar's orders, enlisted the aid of a Company from the Mortifactors chapter, led by Chaplain Astador.[4a]

Upon arriving on the planet, the Space Marines were further supported by the 10th Logres regiment led by Colonel Octavius Rabelaq, the 933rd Death Korps of Krieg led by Colonel Trymon Stagler, and the PDF Regiments headed by Major Aries Satria. Lord Inquisitor Kryptman was also present to impart his extensive knowledge of the Tyranids to help the war effort, along with a Deathwatch Kill-team led by Captain Bannon.[4x]

When the Tyranids arrived in the system and consumed the planet Barbarus Prime, the Imperials launched an attack in space. Despite an initial victory in destroying a Hive Ship, Inquisitor Kryptman wished to invoke Exterminatus upon the next world in the Tyranids' path, Chordelis, to prevent it from being devoured and swelling the Tyranids' numbers, as planetary evacuation was too slow. Ventris was vehemently against this decision and supported an alternative solution proposed by Lord Admiral Lazlo Tiberius, to slow down the Tyranids by exploding a hydrogen-plasma refinery in space to destroy another Hive Ship. However, Kryptman had lied to Ventris and, with the assistance of the Mortifactors, invoked Exterminatus in spite of the Ultramarines' plan succeeding. The Imperials attempted the same trick again with a second space refinery to destroy another Hiveship. However, the Tyranids adapted to this ploy and the plan backfired on the Imperials, crippling their fleet and forcing the survivors to flee; Tarsis Ultra was left unprotected from space, which allowed the Tyranids to launch their long-dreaded planetary invasion.[4x]

During the Tyranid attacks on Tarsis Ultra, Ventris still found himself haunted by his experiences with the C'tan, the Night Bringer; he managed to move on following spiritual advice from Sister Joaniel of the Orders Hospitaller during prayer in the medicae chapel.[4x]

Ventris assisted Captain Bannon and his team in capturing a Lictor; this proved pivotal during the war, as Kryptman's Magos Biologis aide, Vianco Locard, was able to concoct venom from the Lictor's genetic structure that would send an early generation Tyranid into hyper-evolution, killing the creature. Unfortunately, the only way to utilize this venom was to board the last remaining Hive Ship in orbit and infect the Tyranids' Norn-Queen.[4x]

Out of respect for Captain Bannon, who had died in an earlier mission in destroying another Hiveship, Ventris assumed command of the Deathwatch team before its boarding mission. This was in breach of the Codex Astartes, when Ventris ceded command of his men on the planet to his senior Sergeant, Learchus Abantes.[4x]

Ventris, Pasanius, and the Deathwatch team managed to finally kill the last Norn-Queen with Kryptman's gene-poison. However, at the last moment Ventris himself was poisoned by the Norn-Queen, causing his entire bloodstream to clot within his body. He would have died but for a full blood transfusion contributed by Pasanius, which kept him alive until they got him medical care on Tarsis Ultra. The remaining Space Marine contingent of both the Ultramarines and Mortifactors were down to sixteen men when the Tyranids started to attack each other, as the link with the Hive Mind was lost when the last Norn-Queen died. The psychic shockwave of the overmind's death affected the Tyranids into slaughtering each other senselessly, leaving the Imperials alone. The majority froze to death under the harsh conditions of Tarsis Ultra with a minority surviving and taking refuge in warmer surroundings. At the conclusion of the war, Ventris reaffirmed his faith as an Ultramarine to protect the Imperium from the enemies of Mankind.[4x] 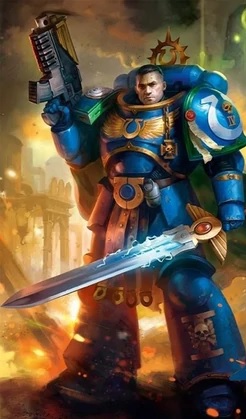 Despite Ventris's sincere belief that his actions had been correct, Learchus reported his and Pasanius's breaches of the Codex to Chapter command. Ventris and Pasanius were both arrested and placed on trial. Based on some discreet advice from Lord Calgar (passed along by First Captain Agemman), Ventris and Pasanius waived their rights to defend themselves, so as to prevent their example from being followed by others and causing anarchy in the Ultramarines.[6]

Instead of death, their punishment was to be bound to a Death Oath and exiled from the Chapter. All insignia of the Ultramarines, which included the symbol on their shoulderguards, were removed. Upon leaving the Fortress of Hera to embark on the March of Shame, they were commanded by Calgar to seek and destroy daemonic womb creatures, the Daemonculaba, seen in a vision by the Chief Librarian Varro Tigurius.[6][7]

Ventris and Pasanius left Macragge on a vessel, as the Imperial Guard Regiment aboard, the Macragge 808th, was bound to fight against the 13th Black Crusade in the Segmentum Obscurus.[7]

During transit in the Warp, the ship's Geller Field inexplicably failed, and all those within the ship perished, except for Ventris and Pasanius. A daemon known as the Omphalos Daemonium appeared, and overpowered the Ultramarines, taking them captive on board his Daemon Engine. They were transported to the Iron Warriors homeworld, Medrengard, and charged with the task of retrieving the Heart of Blood from the fortress of Khalan-Ghol. Threatened with the annihilation of Macragge and Ultramar, Ventris complied with the Omphalos's demands. However, after the daemon departed, Ventris assured Pasanius that he would not honour the pact, and instead would destroy the Heart of Blood.[7]

During their journey, Ventris and Pasanius encountered renegade Space Marines, led by former Raven Guard Shadow Captain Ardaric Vaanes. The Ultramarines followed the renegades to their sanctuary, and met the few remaining survivors of 383rd Jouran Dragoons, left after the Iron Warriors overran the Forge World of Hydra Cordatus. Based on what he heard from the renegades, Ventris worked out that the new castellan of Khalan-Ghol, Warsmith Honsou, had created a new "factory" of Chaos Space Marines, using the Heart of Blood (a powerful daemon) and geneseed captured from Hydra Cordatus.[7]

Ventris led the renegades in an assault on Khalan-Ghol, which was already under siege by Honsou's rival Warsmiths, Toramino and Berossus. After an initial encounter with Honsou and his retinue, Ventris led his band inside the fortress only to be captured by the Iron Warriors. On the orders of Honsou, Ventris was to be fed to the daemonculabu and the rest were sent to the Savage Morticians to be killed. Ventris escaped and succeeded in freeing the others, and led them in escaping the fortress through the sewer systems. The foray in the fortress cost them dear, as only four survived with Ventris and Pasanius: Vaanes, Colonel Mikail Leonid and two other renegades. The survivors were then captured by monstrous mutants known as the Unfleshed and taken to their home.[4x]

The Unfleshed were the mutated rejects of the Daemonculaba; born disfigured and without skin, they were cast away by their creators. The Iron Warriors mass-produced skin to flesh newly born Iron Warriors, but those rejected were discarded. Ventris convinced the Unfleshed, who still worshipped the Emperor, to join him in his mission to destroy Khalan-Ghol. Vaanes and the other renegades abandoned Ventris, except for Leonid.

During the battle between the two daemons, Ventris and Pasanius made their escape, and Leonid sacrificed himself to prevent the Sarcomata from stopping them. However, the Ultramarines were cornered by Honsou and his retinue who outnumbered them. At the very last moment, the Unfleshed saved them by attacking and killing the whole retinue; Ventris managed to shoot Honsou, wounding him. At the point of being defeated, the Heart of Blood conjured up a bloodstorm which killed all nearby, including the daemonculabula.[7] Having been strengthened by the bloodstorm, the daemon went on to defeat Omphalos Daemonium, and collapsed out of exhaustion in the aftermath. The Ultramarines' final action at Medrengard was to board with the Unfleshed, upon the Daemon Engine left behind by the Omphalos Daemonium, to escape imprisonment beneath the fortress.[7]

After departing the Eye of Terror, Ventris and Pasanius arrived on the troubled planet of Salinas. Here, they established contact with Imperial forces, and were taken to the Imperial fortress to await judgement. The Imperial Guard stationed on Salinas had become corrupt and debased, having killed thousands of innocent civilians just to get to the rebel leader. As such, the remaining rebels constantly attacked the Imperial Guard whenever they could, turning Ventris and Pasanius into prime targets. While there, the Unfleshed were quickly possessed by the souls of those killed, and they turned on the Imperial Guard stationed on the planet. Having detected a strong Warp influence on the planet, a detachment of Grey Knights was sent to investigate. They captured Ventris and Pasanius and held trials to determine their loyalty to the Emperor. After passing the trials, Ventris, Pasanius, and the Grey Knights were sent to kill the Unfleshed. After incurring terrible losses, the Grey Knights returned the two to Macragge.[8]

In early M42, a scarred and aged Ventris reappeared, once again leading the 4th Company during the return of Roboute Guilliman. Ventris has since crossed the Rubicon Primaris and took part in the Indomitus Crusade.[10] However another source states Ventris and his 4th Company took part in the Ultramar Campaign and Terran Crusade, meeting Guilliman earlier than initially depicted.[11c]

A few months after becoming a Primaris Space Marine, Ventris is deployed to the world of Sycorax alongside other 4th Company veterans such as Pasanius Lysane and Learchus Abantes in order to battle the Necron forces there which are rumored to include a shard of the Nightbringer.[11c] Fighting alongside Mechanicum forces from Lucius, Imperial Guard, and the Legio Astorum Ventris and the other Imperials are able to defeat the shard of the Nightbringer.[11a]

Later Ventris journeyed to the Macragge's Honour personally to tell Guilliman of Mortarion's invasion of Ultramar.[9] 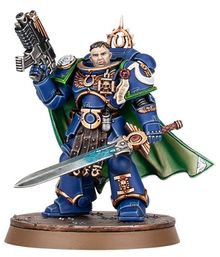