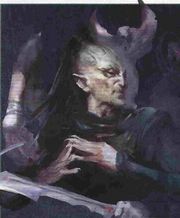 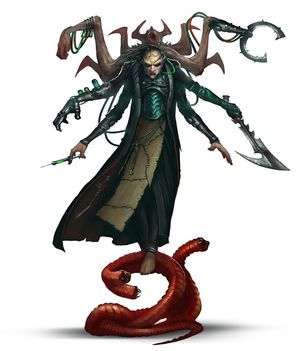 "We learnt long ago that the inscrutable universe turns upon an axis of suffering, because pain is inevitable"[3]

Urien Rakarth is the much feared master of the Haemonculi sect and lord of The Prophets of Flesh Coven.

Ancient enough to have witnessed the Fall,[1] Urien is a depraved genius in the fields of bodily manipulations anatomical sculpture, and his skills as a flesh-crafter are legendary. Through the many millennia of his existence, he has developed a uniquely expansive knowledge of pain and torture. Although he once enjoyed a senior position in Commorragh's intrigues, Urien has long since transcended such squabbles entirely. Now he only exists to revel in depravity.

As the progenitor of the art of regeneration, Urien has died and risen back to life so many times that he now savours death like a fine wine. Each time Urien dies, his remains are used to slowly grow another iteration of himself. Each of his surgically-altered bones holds the key to his resurrection. In recent centuries, however, something seems to have been corrupted in the regeneration process, and Urien's latest incarnations have each borne a vestigial part of the one before. Through his experiments, he has destroyed his own sanity, and wanders the macabre catacombs that make up his laboratory aimlessly, gibbering crazily to himself as he performs pointless "experiments" on his unfortunate test subjects.

In 999.M41 due to the instability of Khaine's Gate, Rakarth works with Vect to create a pocket dimension to store slaves and raw materials in; fodder for Commorragh to prey upon should a cataclysm occur.[2] He is currently seeking to capture and study new Primaris Space Marines while also seeking the location of Yvraine. To what end he seeks the prophet of Ynnead is unknown, though he may be working for Vect or seeking her power for himself.[4]

Urien is a truly horrific sight, his compound spine sprouting from his back in baroque profusion and his leering face tied onto his skull with cords of leathery flesh. He has many sets of limbs; some stripped, silvered, and re-strung as fully functional appendages, some atrophied and disturbing, pushing out of his many-spined sump to beckon weakly at those nearby.

Urien's greatest weapons are his demented creations. Amongst these are his Wracks and towering Grotesques. Through his many experiments, Urien has developed a technique for creating Grotesques, through which only the most physically and mentally capable subjects can survive. This leaves Urien with Grotesques that can truly be said to be the pinnacle of their kind, which he likes to refer to as his Uber Grotesques. They somehow retain more of their consciousness than most, leaving them more capable in battle, and yet they are even more formidable than normal Grotesques, occasionally shrugging off wounds that would outright destroy their weaker siblings.

Urien, due to his superior craftsmanship and encyclopedic knowledge of pain and death, is capable of both creating and utilizing the full array of Haemonculus Weaponry to an extreme level of proficiency. He brings all of his devices that he can manage to a battle, and displays a level of precision with his strikes that is unmatched by all other Haemonculi, thus cementing his title as Master Haemonculus. His weapons include a gauntlet that can inject his own highly mutagenic ichor into his foes and a blade that can kill with the slightest scratch.