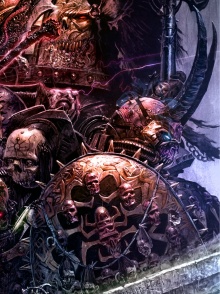 Urkrathos, also called Urkanthos[3], is a Chaos Space Marine of the Black Legion, follower of Khorne, and one of the four Chosen of Abaddon. Selected to command the fleets of Chaos at the launch of the 13th Black Crusade, his flagship was a Grand Cruiser originally named Ius Bellum during the Great Crusade, but once Horus had made his intentions known it was renamed the Hellforger.[1]

He was involved with the struggle over the Dark Mechanicum controlled Forge World of Chaeroneia, in opposition to the Imperial forces lead by Inquisitor Nyxos and Rear Admiral Horstgeld. Urkrathos was aided by the mutant Feogrym in this endeavor, and had allied himself with Archmagos Veneratus Scraecos, who had controlled Chaeroneia at the time.[1]

In addition, he leads a mob of vicious Khornate Chaos Space Marines known as the Hounds of Abaddon.[2]

During the 13th Black Crusade, Urkanthos became a Daemon Prince after pleasing Khorne with the mass killing caused by the destruction of three great imperial ships. He was killed on Cadia fighting Saint Celestine and her two Geminae Superia.[3] Urkrathos' place in the Chosen of Abaddon was replaced by Threxos Hellbreed.