Guardsman 5520435460 (nicknamed by his comrades as "The Nuclear Soldier" for his tendency to bring all his equipment, even his hazardous environment gear, despite not needing it) was once a simple medic of a little known Imperial Guard regiment. TNS made friends with the unit Enginseers as his medical training showed him the weakness of flesh. He was then informally inducted into the Cult Mechanicus, even if he was not part of the Adeptus Mechanicus. Sometime later, his regiment was chosen and taken by the Adeptus Mechanicus for experiments (commissioned by the Inquisition) for experimentation based on rediscovered information fragments of the process that created the felinids. The batch TNS found himself was used to test certain canine DNA, in an attempt to create loyal soldiers with enhanced senses. While the experiment was successful, all subjects experienced canine like mutations and severely reduced lifespans. As such, they were deemed failures and slotted for extermination. It was only TNS's connections with the former unit's Enginseers that saved him.

To save his life, he was formally inducted into the Adeptus Mechanicus, granted their protection, his status listed as "Abhuman" instead of "mutant", and he was given the blessings of many augmentations to better mask his new form. He was then assigned to Collegia Titanica as an Enginseer. He served proudly with a Legio, keeping his assigned god-machine working, blessed, and cared for. But the Inquistion did not so easily forget about him and, after many close calls with wary Inquisitors, TNS was reassigned to a Rogue Trader's ship, with the mission to seek out lost technology and Titans, and to keep him away from the greater Imperium (and its more puritan Inquisitors). 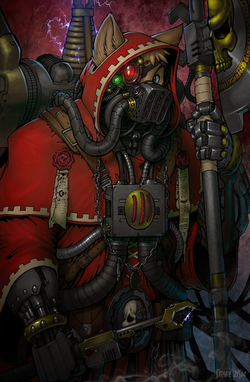