The Brotherhood of the Knife

The Brotherhood of the Knife was a Chaos cult in service to the Word Bearers Traitor Legion during the Battle of Calth, at the time of the Horus Heresy[1a]. Their name in Colchisian was Ushmetar Kaul, literally translated into Low Gothic as "sharp edge by which false reality may be slit and pulled away to reveal god".[2] 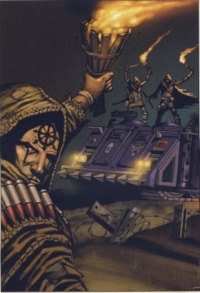 Brotherhood of the Knife attacking Ultramarines vehicles[3]
They were the largest and most effective Cultists utilized by Chaos forces at Calth.[4]

The cultists wore long robes, as if in parody of ancient monastic orders. They conducted several massed attacks on the Ultramarines defending strategic positions after the Word Bearers' initial attack, including the 21st Company guarding the railway approach to Numinus City[1a]. Although they were not well-disciplined, their numbers and suicidal tactics caused several grave casualties among the Ultramarines, weakening them in advance of the assault by Chaos Space Marines[1a][1b][1c][1c][1d]. They became infamous for their atrocities committed against Ultramar civilians.[4]

The Brotherhood of the Knife still exists 10,000 years later, and recently fought alongside the Word Bearers in the Talledus War.[5]