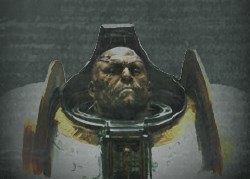 In late M41, Aurikon and his Brotherhood came to the aid of the Space Wolves Chapter, when the Daemon Prince Magnus led an invasion of their Homeworld Fenris. However, he was later killed by Magnus, after the Daemon Prince caught the Grandmaster's psychic lightning and hurled it back at him, causing Aurikon's body to turn into nuggets of fool's gold.[2]