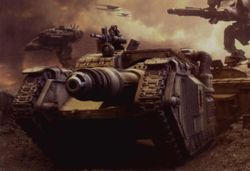 The Valdor Tank Hunter is said to be named after the great hero Constantin Valdor, leader of the Emperor's legendary Custodian Guard during the Horus Heresy. Cryptic data fragments held by the Scholastica Bellicose on Mordia date it to sometime after the Heresy during the bitter wars of the so-called Scouring. It is said to have been the answer to the Great Enemy's numerical superiority of Land Raiders following their capture of Anvilus 9 earlier in the Heresy, and was most likely used by loyal Adeptus Mechanicus forces and those Imperial Army units with close ties to the Machine Cult.[1]

In the 41st Millennium the Valdor remains associated with the Adeptus Mechanicus, with small numbers found on Mars itself and certain far-flung strongholds such as Lathe-het and Cryaxus II, but despite similarities it shares with the Malcador its unique and highly-advanced systems are beyond the abilities of most Forge Worlds to construct or maintain. Among the Imperial Guard a handful of these tanks are maintained as treasured relics by only the most venerable of armoured regiments; the Cadian 1st Armoured Regiment is reported to have five Valdors within its motor pool.[1]

During the Siege of Vraks Valdors were detected only as part of the renegade forces and only at the later stage of the conflict, though managed to had an effect much disproportionate to their number. It is believed by the 88th Army's intelligence officers that in the Vraks' stores there where no more than 20-30 of this tanks and the renegades of Vraks didn't have the knowledge to operate them, so the situation changed only after arriving of Dark Magos and the warband of the Steel Brethren Chaos Space Marines. The evil Marines managed to revive the Valdors and in payment took precious data-core of their design and several Valdors with them - which raises the possibilities of these powerful tanks in future conflicts with the arch-enemy's forces.[3]

The system which sets the Valdor apart from other tank hunters is its primary weapon, the Neutron Laser Projector. The projector and its neutronic-coil arc-reactor, while more compact and less energy-intensive than comparable weapons such as the Shadowsword's Volcano Cannon, still consumes much of the Valdor's internal space. It is also risky to operate due to the relative lack of reactor shielding, especially if the containment coils are ruptured, but is nevertheless a powerful weapon most deadly against smaller tanks who lack the thick shielding and protective mass of large super-heavy vehicles.[1]

A sponson-mounted Heavy Stubber serves as the Valdor's secondary weapon, although it can be swapped out for an Autocannon, Heavy Bolter, Heavy Flamer or Lascannon, and it is equipped with a Searchlight and Smoke Launchers as standard. Other upgrades include a Dozer Blade, Extra Armour, a Hunter-Killer Missile and a pintle-mounted Heavy Stubber or Storm Bolter.[1]