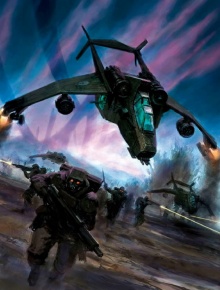 The Valkyrie Airborne Assault Carrier is a heavily armed Imperial Aircraft with VTOL (Vertical Take-off and Landing) capabilities, used to ferry special forces such as Storm Trooper Squads and Drop Troop Regiments such as the Elysian Drop Troops and Harakoni Warhawks to and from combat zones.[2a]

Barring a few exceptions the Valkyrie, like most of the Imperium's aircraft, is piloted and operated by the Imperial Navy, with a pilot, co-pilot and two door gunners.[2a] Valkyries are provided in joint operations for use to the Imperial Guard on an as needed basis, with pilots reporting directly to the regiment's senior officer.[3] However, in cases where a Valkyrie squadron can expect to be attached to Imperial Guard units for a long duration, modifications are made to the Valkyrie to enhance its role of close air support. The most common modifications are Extra armour and a Searchlight. This extra weight reduces the Valkyrie's maximum flight altitude and speed, but allows the crew to use its VTOL capabilities to the maximum potential with improved survivability.[1][3]

With advanced flight control and sensor gear, the Valkyrie contains technology comparable to those found in Space Marine Vehicles, limiting their construction to sufficiently-advanced planets such as Forge Worlds. In flight, the aircraft utilizes twin vectored engines in order to not only vertically take off and land, but also hover in mid-air, allowing for greater accuracy in deploying its twelve passengers. These engines can be sealed, and an onboard oxygen supply employed, for when operating in hostile environments. Common methods for deploying from a Valkyrie range from simply jumping off (if the height from the ground is low enough) to fast-roping and rappelling.[2a] When unable to operate that low to the ground, deploying via high-altitude jumps using grav-chutes are possible, though highly dangerous.[3] In addition, when mounting extra fuel tanks the Valkyrie is capable of carrying a modified Drop Sentinel, Cyclops Demolition Vehicle or Sentry Gun.[2a]

Its primary armament is a Multi-laser, which can be replaced with a Lascannon, and two door-mounted Heavy Bolters. This combination of weapons allows Valkyrie pilots to stay on station once their cargo has been dropped and provide limited air-support to the troops on the ground. In place of the craft's two external fuel tanks the Valkyrie can instead take either two Hellstrike missiles or two Rocket pods, and can receive additional upgrades.[2c]

The Vulture Gunship is a vehicle closely related of the Valkyrie which has been converted into an attack aircraft, sacrificing its troop-carrying capacity for increased firepower.[2d] 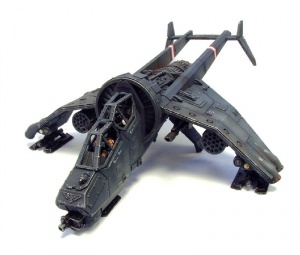 The Vendetta Heavy Gunship is a Valkyrie attached to Imperial Guard units which, in addition to the increased armour, are equipped with three Twin-linked Lascannons, and used as a tank hunter after dropping off any unit being transported by it. Furthermore, it still retains the ability to mount two Heavy Bolter door guns. It may also replace the two hardpoint-mounted Twin-linked lascannons on its wings for two Hellfury Missiles.[3] Despite their impressive firepower, Vendetta Gunships lack the flexibility of Vulture Gunships, which are chosen more often for deep-range attack, strafing and urban assault missions.[5] 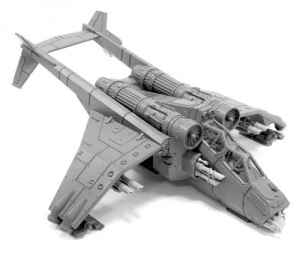 The Valkyrie Sky Talon is a newer variant of the standard Valkyrie airborne assault carrier. A support aircraft used for heavy lifting in combat theatres, the Sky Talon is armed for self-defense and to assist the other assault carriers as they clear drop zones of the enemy. Standard armament is a nose mounted Heavy Bolter turret and two Hellstrike Missiles under the wings, which can be replaced with two Rocket pods. Despite its armament, it is unusual for Sky Talons to be used in a battlefield role. Rather, they deliver their heavy cargo, typically a Tauros or two Drop Sentinels, then quickly exit.[4] 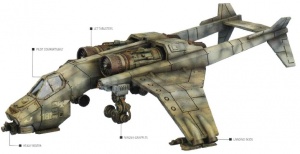 The Spectre-class Valkyrie armored assault carrier is an oversized variant of the Valkyrie designed to transport small vehicles and light ordnance. It deviates from the original design by the presence of four engines, an extended cargo bay able to carry two Centaurs and their troop complement, a nose-mounted autocannon, four door-mounted heavy bolters, and four hardpoints under the wings.[9]