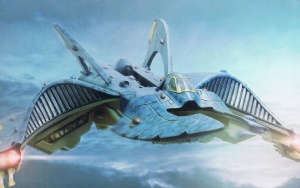 The Vampire Raider is the largest Eldar aircraft yet documented by the Imperium and an orbital-capable dropship. Like the Thunderhawk Gunship the Vampire Raider is used to ferry assault forces onto a planet, descending from orbit at many times the speed of sound to quickly drop off its cargo before ascending back into space just as quickly. The primary transports of Craftworld forces for when a target cannot be accessed through the Webway, Vampire Raiders are also a favorite of Eldar Corsairs for dropping off and retrieving their raiding parties. Many variants of the Vampire Raider exist, the most common one being the Vampire Hunter.[1][2][3][4]

The Vampire Raider is unusually fast, agile and well-armed for a craft of its size, a testament to the advanced technology of the Eldar race, which is more than capable of seeing off enemy aircraft even without Nightwing escorts. A highly configurable vehicle, in its primary form the Raider includes a nose-mounted Scatter Laser and twin-linked Pulse Lasers on under-wing hard points, a Titan-grade Holo-field for protection and the capability to carry up to thirty troops, or half as many Wraithguard, in a passenger compartment accessible through a rear ramp. The Pulse Lasers can be replaced with twin-linked Phoenix Missile Launchers or a Pulsar in a centerline fuselage mount, turning the Raider into a heavy ground attack bomber, although this reduces its transport capacity by ten. Other variants turn it into a heavy transport with gravitic hooks allowing it to carry a Falcon or Wave Serpent into battle.[2][4]