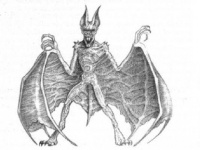 The natural bat-like form of a vampire.

Vampires are polymorphic creatures that are native to the Warp.[1]

These entities do not hold a homeworld and the reasons for their evolution into a parasitic existence within alien societies is unknown. They became entrenched within legends on Old Earth and were later regarded as being discredited myths as well as legends. However, in reality, their existence was real and they were known to infiltrate societies where they masqueraded as their chosen race and sought positions of power.[1] At some point, a Warp-spawned Vampire had risen into power on the Hive World Cephian IV. The Black Templars were known to have battled the creatures, with Helbrecht slaying the entity with this act seeing him inducted into the ranks of the Sword Brethren.[2]

The natural form of a vampire is a humanoid bat-shaped creature. However, they are able to alter their metabolism to mimic the races that they live amongst thus allowing them to blend into their surroundings. As they live in the manner of their chosen race, a vampire is not easily singled out by the societies they have infiltrated. Vampires are known to possess psychic powers that are comparable to Humans and maintain their existence by absorbing the lifeforce of other creatures. They are able to drain this energy through prolonged physical contact though are able to gain some sustenance from normal food or drink. Completely drained victims become something like zombies under Vampire control. By nature, vampires are known to crave power among intelligent races and even regard other members of their kind as a rival thus making them a threat.[1]