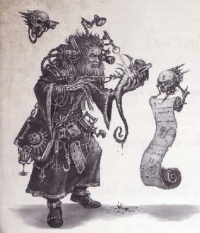 Van Vuygens is an Inquisitor of the Ordo Xenos active in the Calixis Sector.[1]

Rarely seen at Bastion Serpentis, he represents his Ordo on the Tyrantine Cabal. Quiet and scholarly, he prefers to dissect and study xenos instead of exterminating them. Indifferent to all else except alien affairs, despite seeking knowledge on these creatures he has no trust for them and has not descended into Radicalism. Most notably, Van Vuygens is a disciple of the legendary Kryptmann himself, and was sent by him to the Calixis Sector to watch for Tyranid activities. To this end, he believes that the Tyrant Star is the herald of a Tyranid invasion.[1]