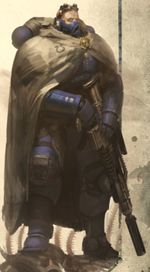 Eliminator Squads utilize an even more stripped-down version of the Mk.X Phobos Armour, allowing them to operate with maximum stealth. These warriors serve as dedicated marksman and fire support specialists that haunt the shadows of the battlefield seeking out targets of opportunity and bringing them down from a range. Their primary armament is the Mk.III Shrike Pattern Bolt Sniper Rifle, Las Fusil, or Instigator Bolt Carbine[4].