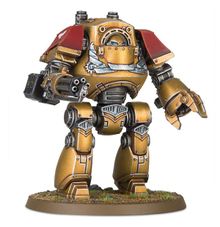 Venerable Contemptor Dreadnought are ancient Dreadnought relics that are possessed by the Adeptus Custodes.[1]

Venerable Comtemptor Dreadnoughts incorporate wonders of technology that the Imperium can no longer replicate. Despite this, the Custodes have the resources to keep the Venerable Contemptors well maintained and the Dreadnoughts are well defended by atomantic shields, that can dispel laser blasts and artillery shells amidst bright flares of energy. They also have auto-repair protocols that allow the Contemptors to shrug off crippling battle damage, while motive shrines and auto-sanctified backup systems stand ready to take the strain should the Contemptor undergo serious combat trauma. Yet for all this arcane technology, the most important component of the Venerable Contemptor Dreadnought is the living warrior interred in the sarcophagus at its heart. Though the physiology of the Custodians is remarkably durable, still there are wounds so severe that even they cannot survive them. When faced with certain death, a Custodian may choose to be preserved within a Venerable Contemptor Dreadnought so that he can continue to fight for the Emperor. There should be no mistaking that this is the act of a martyr. For life within a Dreadnought sarcophagus, even one as advanced as the Venerable Contemptor is a twilight existence at best. The pilot is shorn of all unnecessary flesh, rendered down to little more than a sack of organs and brain matter sustained within an armaglass amniotic tank. They are then permanently fused with the life-support systems of the Dreadnought. Its powerful limbs become theirs to operate. Its complex sensoria become their eyes and ears, its vox emitter their mouth. Though normally only Custodes who have been mortally wounded are interred within Venerable Contemptor Dreadnoughts, there are tales of unharmed Custodians volunteering to pilot Contemptors whose previous occupants were slain in battle. This has included those soon to depart as Eyes of the Emperor, those who feel they have dishonoured themselves, even warriors who simply will not turn aside from what they perceive as their duty. Regardless of their reason for doing so, these Custodes willingly gave away their flesh, so that the Venerable Contemptor Dreadnoughts can continue to stride to war against the Imperium's enemies.[1]