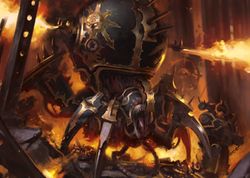 These towering spider-like Daemon Engines are hosts to parasitic entities that infest the tides of the Warp, preying upon stray souls and lesser Daemons alike. Dragged into realspace and bound into hunks of metal by either Masters of Possession or Warpsmiths, these creatures often haunt the flesh factories of Daemonic forges. During the ritual of their summoning, Venomcrawlers are often embued with the most horrifying parasitic entities of the Warp. These Daemonic presences are bound to their structure. As more Daemons are absorbed into its metallic form, a Venomcrawler's form will distend hideously and create a reservoir of empyric energies within its swollen body. This makes Venomcrawlers valued both and off the battlefield, for their repositories of stored Warp energy can be used to create fresh Daemon Engines.[3]

Venomcrawlers are often used to hunt down rogue entities that have escaped the clutches of their summoners, consuming the raging spirit once it has been cornered. This daemonic energy can be used to power the Venomcrawler's formidable weaponry which come in the form of Excruciator Cannon pods.[2] The very presence of Venomcralwers are also able to thin the veil of reality itself, allowing Daemons easier access to Realspace.[1] Masters of Possession are particularly adept at drawing upon the energies of Venomcrawlers to lure Daemons into the Materium. At battle's end, these entities are hastily devoured by the Venomcrawler.[3] 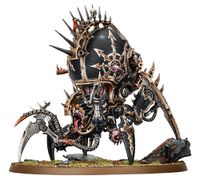