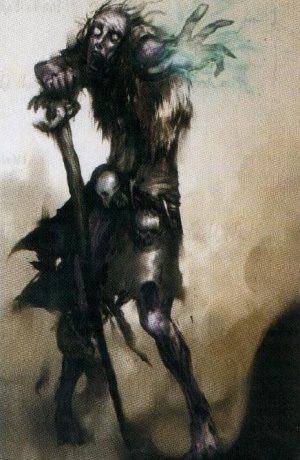 A Verminspeaker is a type of unsanctioned psyker that has managed to avoid the hunters of the Black Ships. Those verminspeakers that manage to survive long enough flee into the wastelands of their world.[1]

They developed most of their powers through a mixture of guesswork and experimentation, without drawing attention from things that lurk within the Warp. They are partially feral and unnaturally attuned to their environment, and as such deal commonly with Maw-flukes and Saber-Wolves.[1]

The Puritan Inquisitors burn them in witch's pyres, while the Radicals find them a hardy and resourceful individuals to employ.[1]

Among their psychic powers are Verminspeaking, the ability to see through an animal's senses, and Bestial Ally, the ability to impose his will on a beast as if he were a dominant member of its species.[1]