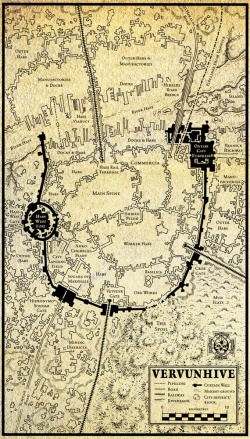 Vervunhive was one of many Hive Cities on the world of Verghast. It was destroyed during the war with another Hive City, Ferrozoica, acting under the influence of Chaos. Its last ruler was High Master Salvador Sondar.

Vervunhive was arranged with the outer habs and manufactories running along the River Hass to the north, with two bridges leading inside the main Hive, one rail, and one road.[1a]

Central to the hive was the Main Spine, surrounded by more habs, the Commercia district, and the Shield Pylon in the very center. To the west was the Hass West Fort, which was manned by Vervun Primary troopers and officers, the City Landing Field, and more habs outside the great walls.[1b]

Various mining districts lay outside the southern gates, with The Spoil and the Mud Flats to the southeast, past the walls.[1a]

The Hive was a busy place during most times of the day, with many of its citizens attending jobs for the various Noble Houses, such as Sondar or Chass. Public address plates displayed holos about the day's news.[1b]

Vervunhive was a place heavily dependent on trade for survival. The Commercia was where most of this was arranged, from inter-house trading in Vervunhive, to arrangements with other hives on Verghast.[1b] 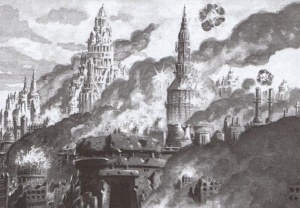 Vervunhive after the shield failure
Main article: Siege of Vervunhive

A producer of large quantities of materials for the Imperial Crusade that was occurring in the Sabbat Worlds sector, it was drawn into the crusade directly when it was attacked during an attempt to conquer the world for Chaos. Initially, the inhabitants of Vervunhive thought they were under assault by the rival hive of Ferrozoica in a replay of the "Trade War" of 90 years earlier.[1b]

However, when Commissar Pius Kowle led a Vervunhive armoured division out to meet the forces of Zoica, it became clear that this was no conventional assault; the Zoican army massed in the millions.[1c][1d] In comparison, Vervunhive could muster only approximately 500,000 troopers out of a population of over 40 million people. What made the force imbalance all the more disturbing was that Ferrozoica was approximately 1/3 smaller in population and size than Vervunhive.[1d]

The allied Vannick Hive was the first major casualty of the War when Ferrozoica deployed nuclear weapons and all but destroyed it. With the Vervunhive leaders debating reasons why Zoica would destroy rather than capture, Colonel-Commissar Ibram Gaunt made the judgment that with the size of Zocia's forces and the tactics they were using, that the whole hive had actually fallen to Chaos and that this was more than just a Trade war.[1e] This proved to be a correct judgment, and it would transpire that the whole population of Ferrozoica had become the thralls of the Chaos Warlord Heritor Asphodel.[1f]

During the war, Vervunhive was protected from artillery bombardment by its Shield. However, the corrupted High Master Salvador Sondar, following orders from Heritor Asphodel, lowered the Shield at the most critical moment.[1g] Much of the Hive City was destroyed until a strike-force led by Colonel-Commissar Ibram Gaunt managed to infiltrate the High Master's quarter and brought the Shield back online.[1g] Gaunt then proceeded to lead another strike force of Scratch Troopers, Tanith and Volpone into the mobile base of Heritor Asphodel and destroyed it. With the base destroyed, Zoican forces were left disoriented and swiftly fell apart.[1h]

Soon after this, Warmaster Macaroth deployed massive reinforcements to the planet, which included 6 million Guardsmen, 500,000 tanks, 3 companies from each of the Iron Snakes and Imperial Fists Chapter, and 2 Titan Legions. The Imperial reinforcements then proceeded to hunt down and exterminate the last of the Zoican forces. The battle was finally won.[1i]

With the hive all but destroyed Warmaster Macaroth created the Act of Consolation, whereby civilians could join up with the Imperial Guard regiments or move onto the new hive cities being created.[1i]