The Vespid, known as Stingwings by the Imperial Guard or Mal'Kor by the Tau)[2] are an insectoid race allied with the Tau Empire.[1]

Hailing from the world of Vespid, the race was already fairly technology adept when they were approached by the Tau Empire's Water Caste diplomats. It seemed unlikely that the Vespid would ever submit for the Greater Good, as their mindset was so freakishly different to anything the Tau could understand that their emissaries made little headway. However after the Ethereals provided the Vespids with a custom-made communication headset, the Vespids suddenly became completely complient, calmly accepting total annexation by the Tau Empire. Rumors have circulated every since as to what true purpose these headsets serve.[4a]

The inhabitants of the planet Vespid are a bipedal, vaguely insectoid race which have a sturdy chitinous exoskeletal barbed armour that encases their bodies. They stand somewhat taller than the average human and appear to be much faster, due to the chitinous wing-like protrusions on their backs which emit a ultrasonic tone, which they use to control and modulate their technology. They have three pairs of eyes running in two lateral lines down their faces, one perceives the ultraviolet range, the second perceives the normal visible spectrum, and the last sees the infra-red. The females are larger.[2]

Their mouths are an arrangement of mandibles each with a row of sharp teeth.[Needs Citation]

The Vespid warriors, called Stingwings, form tactical units referred to as Strains. Each Strain is lead by a Strain leader.[1] Because the Vespid language is so complex (presumably because of their complex mouths) and only the Strain Leaders are given the apparatus to translate their language to their Tau allies, Vespid Strains are very close knit and a lot of reliance on Strain Leaders comes from both sides.[Needs Citation]

Stingwing Strains are highly sought after in Tau Fire Warrior Cadres because of their high level of maneuverability. They are often used by Tau commanders alongside Crisis Battlesuits or used in a scouting role, backing up Pathfinders. In the Tau language they are referred to as "Mal'kor," which comes from "Mal" meaning insect and "kor" meaning air.[Needs Citation] 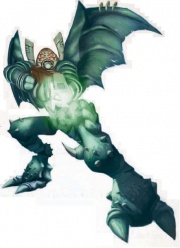 The Vespids' technology is based around exotic crystals which are only found on the bottom of the floating islands of their homeworld, which they manipulate with the ultrasonic sounds manipulated from their wings.[2]

From the Tau they have gained armor and weaponry, and a Vespid Communion Helm that enables them to more freely communicate with other races (as their own language is extremely complex and for the most part inimitable). Their weapons are a mixture of Tau technology and Vespid resources enables them to act as specialist against heavily armored troops (specifically the Space Marines, whom the Tau have always had problems fighting against).[Needs Citation]

The Neutron Blaster which the Vespid Stingwings carry, is a unique blending of Tau technology and the unstable radioactive crystals that the Vespid mine. The energy harnessed from the crystal allows the weapon to strip atoms off of the target. Due to the Vespid's wings creating different harmonic resonances within the crystal, they are the only creatures able to effectively wield the Neutron Blaster.[Needs Citation]

In terms of their own technology, the closest thing that has so far been recognized is their own wings. It is unclear yet just how their wings are used, whether they are flexible enough to oscillate fast enough or are capable of ejecting fluid or plasma to produce lift, is yet to be ascertained. In either eventuality they are capable of flight and are often deployed onto the battle field from the air, enabling them to join the battle in the most suitable location.[Needs Citation]

The Vespid have stalactite-like Nest Vessel spacecraft, which they used as auxiliaries in the Farsight Expedition's Grand Reclamation Fleet.[6]

The Vespid were first introduced to the Warhammer 40,000 universe in Codex: Tau Empire (4th Edition).[Needs Citation]