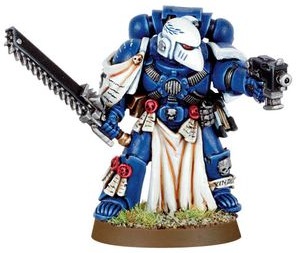 Veteran Space Marines are mostly members of the 1st Company of a Space Marine Chapter, the so called Veteran Company. They form the Chapter's battle hardened core and have wide access to its armoury. Recently, though predominately identified with the 1st Company, each Space Marine Company maintains its own Veteran Squads.[8a]

To be promoted into the 1st Company is a great honour for all battle-brothers. Those that have proven themselves worthy usually have centuries of service behind them and have risen to the rank of a sergeant. Sometimes a less experienced Marine may be accepted after committing several acts of outstanding heroism.[4][5]

The Marines of the 1st Company bear the privilege of taking the Chapter's finest and most revered equipment to battle, as well as the duty to return with it afterwards.[5] 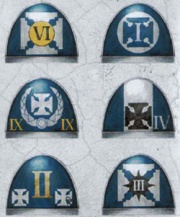 Members of the 1st Company traditionally wear white helmets. The sergeant's red helmet is adorned with a white stripe.

Their power armour features white or silver trimmed shoulder pads. The tactical symbol on the right shoulder is a stylized cross which is derived from the Crux Terminatus. A small crux, known as "Terminator honours" is carried on the left knee pad.[1][2]

Some Codex-divergent Chapters have their own unique veteran formations. Below are some notable examples: