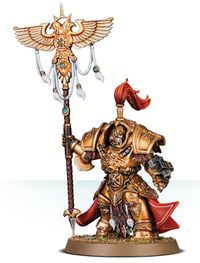 Vexilus Praetors are the Standard Bearers of the Adeptus Custodes. They represent some of the most veteran of their order.[2a]

Unlike their counter parts in other Imperium armies, Vexilus Praetors are infused with mysterious crypto-technological abilities that aid their brethren and allies in battle. What abilities come to the fore however, depend on the Standard they carry into battle. Each Custodes Vexilla is created on Terra, painstakingly fashioned over a period of one hundred years by the oath-sworn artisans of the Tower Aquilane. Upon their completion, these beautiful standards are borne amidst processions of craftthralls, Ministorum Priests and servitors to the Auric Eyrie, where they are held upon stasis-podia until required. Some vexillas are purely ritual in purpose, and are carried in procession and parade through the endless leagues of the Imperial Palace. Most, however, incorporate potent technologies suited specifically for deployment upon the field of battle. Those vexillas carried by the veterans of the shield companies typically belong to one of several patterns. More than just standards to inspire adulation or terror, their inbuilt technologies provide invaluable battlefield support to the Custodians fighting in their shadow beaming a constantly cycling set of data-ident codes that convey strategic information with allied Imperial forces, and aid in tactical coordination.[2a]

Vexilus Praetors typically consul the Shield-Captains of a Shield host.[2c]