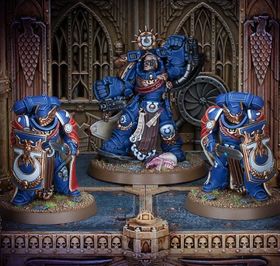 The Victrix Guard defend Chapter Master Marneus Calgar, during the War of Beasts.[3]

The Victrix Guard is a group of veteran warriors within the Ultramarines Chapter.

The Victrix Guard was created by the Primarch Guilliman following his rebirth and each has been hand-picked by him to act as bodyguards and envoys[1]. Guilliman has declared them to be as much statesmen as warriors[2] and because of this, the Victrix Guard seek to excel in every aspect of stagecraft and battle alike[1]. As such, their tactical skill is matched only by their martial prowess[3] and the members of the Victrix Guard are more than capable of cutting their way through entire armies of foes.[1]