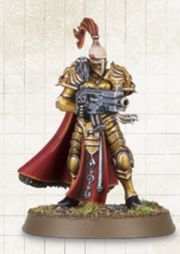 Warrior of the Vigil Indomitus[1]

The Vigil Indomitus is one of the Sisters of Silence Vigils, and was the first created after their order was reestablished by Lord Commander Roboute Guilliman.[1]

Created to aid the Lord Commander's Indomitus Crusade fleets, the Vigil was originally composed of the near-three thousand Sisters of Silence who answered Guilliman's call for them to return to Terra. The Sisters of the Vigil Indomitus then divided themselves into cadres, each of which joined a Crusade fleet's battlegroups. Before they left, however, the Sisters also established a series of new Vigils throughout the Segmentum Solar, in the hopes they would grow and join the later Crusade fleets that would be created at Terra. While many of these Vigils did so, and became invaluable to the Crusade, others met with disaster, or faced circumstances that forced them to venture out on their own. Other Vigils, meanwhile, never received orders to join fleets and continued to watch over the areas they were established in.[1]