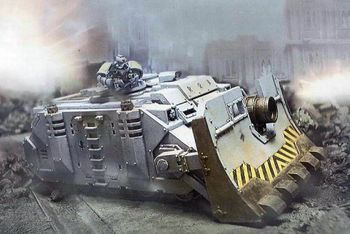 The Vindicator is a short ranged siege tank used by Space Marine Chapters. Based upon the Rhino chassis, it shares many of the same design features, though with equipment and armament optimized to deliver heavy ordnance at short range.

The origin of the Vindicator is fragmentary, although the earliest records shows it was developed along with the other Rhino STC variants during the Dark Age of Technology. The fragments at the request of General Vindictis were recovered from the Librarius Omnis and within this request the General asked for a self-mobile weapon of high calibre, capable of following up with advancing armies and able to engage well-protected targets with a high angle of fire. It is believed that General Vindictus was personally responsible for instigating the idea of the 'Vindicator' so the vehicle was thus named in his honour. The record states that on the planet Rostern 10 assembled Vindicators fought against raiding Orks and though 9 out of 10 were ultimately destroyed in the process, Imperial forces were victorious.[1a] Other records show that the Vindicator was first fielded during the early years of the Horus Heresy on Rostern I, when massive Thunderer Cannons were mounted onto remodeled Rhinos and used to blast heavily dug-in Traitor positions among the urban rubble.[2a]

Later records stated that Vindicators were mentioned very little and it's assumed that these machines fell out of favor. It seems that the production of Vindicators was halted during the Great Crusade and Horus Heresy or that the manufacturing site was destroyed. Only when the mighty Primarch Guilliman mentioned the Vindicator in the Codex Astartes did the Siege tank reappear in the Space Marine Armies. Since the Heresy, the bulky Thunderer Cannon has been replaced with the more compact, but no less potent, Demolisher Cannon, along with other minor modifications to armouring, fire control and driving systems.[1a][2a] The Vindicator has become a vital part of a Chapter's siege and urban combat capabilities, with most retaining a dozen or so vehicles within their Armoury.[2a] 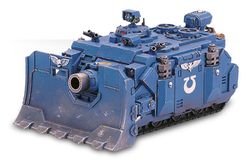 A Vindicator belonging to the Ultramarines.

As laid down by the Codex Astartes, the Vindicator's chief role is in urban combat, to provide assault and tactical squads with destructive firepower against enemy strongpoints and snipers. Standard combat doctrine has the Vindicator advance down a street towards the target structure, supported by Space Marine squads advancing from building to building on either side of it, blasting holes in the walls if necessary. Once in position, the Vindicator opens fire on the target building, reducing much of it to rubble and opening the way for subsequent assault by Space Marines with close-combat weaponry.[1a]

Outside of urban combat, the Vindicator also sees a limited role in tank warfare, with many armoured thrusts containing at least one Vindicator for close-quarter engagements.[2a] For particularly hardened targets, Vindicators will form into Line Breaker Squadrons, combining their firepower for devastating effects.[Needs Citation]

The Demolisher Cannon gives the Vindicator immense destructive capabilities. Firing rocket-assisted siege shells, the Demolisher Cannon can reduce a building to rubble in a matter of moments, crushing the enemies taking shelter under tonnes of rubble.[2a] The cannon's two exhaust vents for vacating rocket back-blast are located behind its multi-spectral targeting array. The Rhino chassis's transport capacity is given over completely to ammunition storage, of which it can carry 16 shells in its racks. That number is normally increased by two, with one shell preloaded and a second stored on the collapsible loading ramp.[1a] Some variants of the Vindicator are equipped with a crane-winch which helps it reload faster.[7] The Vindicator is also armed with a Storm Bolter for close defense.[2a]

In order to survive the brutal close-combat fighting typical of urban warfare, Vindicators have much thicker armour compared to the standard Rhino, especially along its front and top facings. This armour is further supported by extra bracing, which adds additional weight to the frame.[1a]

Dozer Blades in combination with a Siege Shield are typical on most Vindicators, allowing them to easily clear a path through rubble-strewn streets.[2a][2b] Other standard equipment includes a Searchlight and Smoke Launchers. It can be further upgraded with a Hunter-killer Missile, Extra Armour, and a pintle-mounted Storm Bolter.[2b] 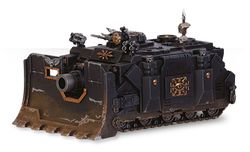 Vindicators were used extensively by the Traitor Legions during the Horus Heresy, specifically in the Siege of the Imperial Palace, and have remained in service with Chaos Space Marine forces since then. The Iron Warriors in particular, field many squadrons of Vindicators and deface them with defaced statuary of fallen cities they have conquered. The Vindicator can also be possessed by a bound daemon.[3][5]

The Deimos Pattern Vindicator was an early type of Vindicator used by the Legiones Astartes during the Great Crusade and Horus Heresy, although many still operate as of M41 in Space Marine Chapters.[6]

Vindicator Laser Destroyers is a powerful tank-destroyer variant of the Vindicator used primarily during the Great Crusade and Horus Heresy, though many are still in service today.[Needs Citation]