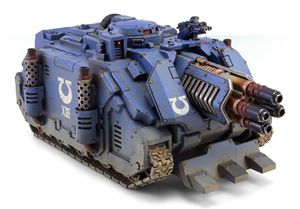 The Vindicator Laser Destroyer is a tank-destroying variant of the Vindicator used by the Space Marines. Tearing through the armour plating of enemy vehicles, the Vindicator laser destroyer array is a potent weapon of destruction. First retrofitted into the heavily armoured Deimos pattern Vindicator chassis during the dark days of the Horus Heresy, several Legions took to fielding this variant as a mainline battle tank, proving itself on many occasions as an able tank hunter.[1]

After millennia of brutal warfare across the galaxy, it is still in favour within the Space Marine Chapters, the Vindicator Laser Destructor continuing to bring retribution to the enemies of Mankind.[1]