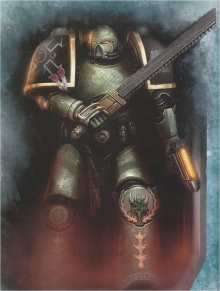 Void Hardened Armour (VHA) is a form of upgraded Space Marine power armour that is most commonly utilised when a Space Marine is expecting to fight for protracted lengths of time in a void environment, or in other void situations when extremes of radiation, micro-meteoric storms or similar stellar phenomena may prove too much for even un-augmented power armour. Whilst all Astartes power armour is capable of limited independent void operation, only VHA provides the wearer with the endurance and protection needed in extended void fighting.[1a]

Almost all known patterns of Astartes power armour may be upgraded with specialist equipment for void operations. This equipment may vary enormously depending on the particulars of the environmental threat, however there are several core features that appear in most suits of void hardened armour. Namely, these features are:

These modifications are applied to an already existing suit of power armour and depending upon the Chapter's level of technological prowess, the quality of this artifice results in anything from bulky and obvious additions, to seamless integration with the base armour.[1a] As a consequence of the increased weight gained by the incorporation of these systems, it has been known that the servos and power systems of VHA become over strained, requiring careful and constant maintenance between combat. This, in part, was responsible for the development of Tactical Dreadnought Armour to counteract these deficiencies.[2a]