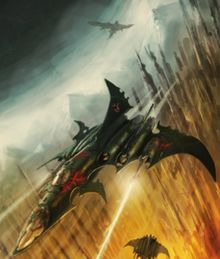 The Voidraven Bomber is a type of Dark Eldar aircraft.[1]

Though considered by the Dark Eldar to be the ultimate in heavy weapon deployment, the Voidraven Bomber is an extremely agile aircraft capable of outmaneuvering Imperial aircraft with ease. In addition, Voidravens are equipped with sonic dampening systems, making them virtually silent to unsuspecting victims below. Equipped with Void Lances or Dark Scythes[3] and missiles, the Voidraven is well suited for ground attack missions. However, this is not its most feared weapon. Each Voidraven carries a single Void Mine which introduces darklight into real space in a catastrophic implosion that leaves nothing but an enormous hemispherical crater in its wake. It is for this reason that Voidravens are one of the most feared weapons deployed by the Dark Eldar.[1]

The Voidraven can be equiped with one of several known types of weaponry[1]:

Known Named Voidravens and its Pilots 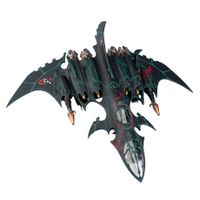