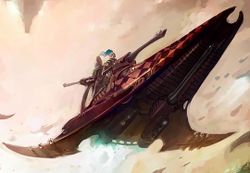 The Voidweaver is a type of anti-gravity vehicle used by Eldar Harlequins.

Boasting a veritable arsenal of heavy weaponry, Voidweavers leave flaming devastation in their wake. Their every salvo sees enemies punched off their feet as storms of shuriken scream through the air, and enemy tanks are vaporized by the deadly Prismatic Cannon.[1]

The Voidweaver is a mobile gun platform armed with 2 shuriken cannons, one is under-slung beneath the front of the vehicle and the second is rear-facing and mounted on the platform on the top of the Voidweaver. They may also be armed with either a pintle-mounted Haywire Cannon or a prismatic cannon as well as 3 banks of Mirage Launchers.[1]

Even the location of the Voidweaver's aft weapon possesses a ritual significance for the Harlequins. The vehicle itself is named after the second of the Cosmic Serpent's brood. Legend tells that in his older brother Starweaver's shadow, Voidweaver became ill-tempered and brooding. It would fight at the slightest provocation and reveled in proving its superiority. Its caution became such that it spouted a second head, looking always behind so that he would never be surprised. In the old stories, this serpent never allowed Cegorach top ride upon its back, but after the Laughing God bested it in a trial of cunning the Voidweaver lent its strength to the Harlequins, acting as a sentry and accomplice.[2]