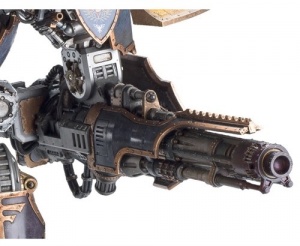 The Volcano Cannon is amongst the most powerful ground-based laser weapons used by forces of the Imperium of Man, unleashing terawatts of energy[9] in a blazing white laser beam which produces a thunderous crack and tremendous recoil[7].

The crystals needed for the weapon to fire, are taken from a mineral vein on the Mining World Cinderus XI. Created when Heretic Psykers were slaughtered and buried beneath the lava rivers on the planet, after a failed plot to kill the Planetary Governor, the crystals cause a loud crackling noise to be emitted by the Volcano Cannon when fired. This noise, which some claim are the final screams of the dead Psykers, has been known to drive those who fight beside the weapon insane; though the tank or Titan crews themselves have never been reported to suffer from these ill effects. As a result units of infantry escorting vehicles and Titans using the Volcano Cannon are subject to periodic purges. The Imperium sees this as an acceptable price to pay for deploying such a devastating weapon on the battlefield.[11a]

Can be carried on the carapace of a Warbringer Nemesis Titan.[14]

Was said to be even more powerful than the current MkIV, but was never used in service due to being too volatile. When the Teracharge was fired it almost always destroyed the arms of the Titans and hulls of the tanks that carried it. As a result, it was ultimately determined to be a failure by the Adeptus Mechanicus.[11a]

In the original Adeptus Titanicus-era material, the Volcano Cannon was referred to as the Defence Laser[6]