The Volscani Cataphracts had a long and distinguished history, and were believed to be loyal by the Imperium at large.[1a] However, at least one Volscani unit already turned traitor before the 13th Black Crusade, joining the Cholercaust.[3a] 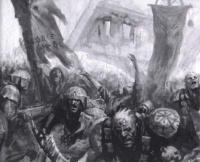 Years later, the Volscani Cataphracts were selected to assemble at Kasr Tyrok on Cadia as part of a general muster to prepare the planet for the 13th Black Crusade.[1a][2a] At their welcoming ceremony, however, the Volscani stormed out of their landing ships bearing the signs of Chaos. They massacred the Cadian Interior Guard's General Staff at the Battle of Tyrok Fields. Sending the shocked Cadian defenders reeling and rampaging across the fields of Tyrok, the Volscani hordes were only stopped by a swift counteroffensive led by Lord Castellan Ursarkar E. Creed. Slowly overwhelmed by the attack, the suicidal Volscani present at Kasr Tyok fought to the death.[1a]

However, many regiments of Volscani Cataphracts were still active and continued to support the progressing 13th Black Crusade. When the fleet of Abaddon first entered the Cadian System, Volscani Cataphract regiments landed on Solar Mariatus and overran parts of the planet to establish a forward base for the Chaos forces.[1b]

Later on, the Volscani Cataphracts formed one of the main Traitor Guard formations involved in the invasion of Cadia itself. They were part of the Chaos force which besieged Kasr Myrak, and despite having turned bestial and less disciplined, were still much more of a threat than the average Chaos Cultists and Mutants. Alongside contingents belonging to the Iron Warriors and Black Legion, they were instrumental in overruning the heavily fortified Kasr Myrak.[2b][2d] Afterwards, substantial numbers of Volscani remained in Kasr Myrak and mopped up Imperial holdouts, even though the main Chaos force moved on to other targets.[2c][2d] Later, Volscani units were among the Chaos forces which attempted to resist an Imperial counter-attack toward the Elysian fields.[2e] When Abaddon rammed Cadia with a Blackstone Fortress, thereby triggering the entire planet's destruction, many Volscani Cataphracts remained behind, still fighting Imperials as the world died around them.[2f]

The Volscani Cataphracts are known for their fanatical bravery, savagery, and discipline.[1][3a] They mostly operate as infantry,[3a][2d] although some Volscani units also field armour such as Chimera and Leman Russ Battle Tank variants. The Volscani Cataphracts wear uniforms with an embroidered "VC" on their collars.[2c] They mostly use flak armour, modified with heretical symbols, spikes, and colored red after falling to Chaos.[1][2c][2d] At least the Volscani fighting for the Cholercaust were noted for their heavier combat armour.[3a]