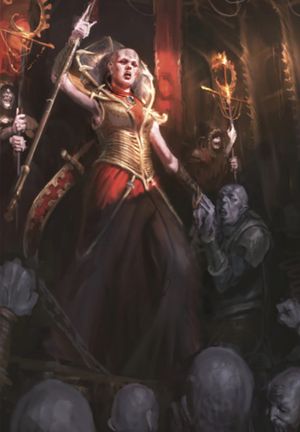 The Vorotheion Uprising began in M42, when the Imperial Hive World Vorotheion was struck by both an invasion of the Tau Empire and the Pauper Princes Genestealer Cults.[1]

The Hive World initially dealt with only the growing influence of Cults worshiping the Tau Empire, but this changed when the Xenos offered to annex Vorotheion. The Pauper Princes Cults feared they would lose the world, they had sought to turn Vorontheion against the Tau. Using Cult members in high ranking positions and the psychic powers of their Maguses, to vote down any attempts at affirming an alliance with the Tau Empire. As this was occurring, the Cults' Biophaguses implanted more and more of the populace with Genestealer germ-seed, while Kelermorphs and Sanctuses cut down anyone who was a hindrance to their plans. After discovering the similarities of the Greater Good with their own creed, the Cults even managed to bring some of the Tau's worshipers into their fold. However, after their offers of allegiance were constantly rejected, the Tau Empire began a military invasion of Vorotheion and in doing so caused the Pauper Princes to finally reveal themselves. In the war that followed, the Genestealer Cults' preparations and infiltrations, led them to soundly defeat both the Imperium and Tau Empire. Much of Vorotheion is now under their control, though, the Tau and Imperium still possess a few of the world's Hives. The Pauper Princes are undaunted by this, and have already begun work to welcome the Star Children to their home.[1]