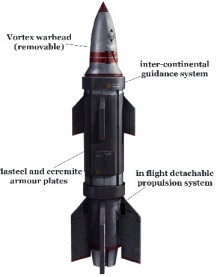 Vortex Missiles are a type of Vortex Weapon which can be launched by a Deathstrike Missile Launcher, Imperial Titan, or a Strongpoint.[3] They are a product of the Dark Age of Technology and one of the rarest weapons available to the Imperium.[1]

These weapons are as rare as they are powerful, tearing apart the very fabric of reality to create a gaping hole that sucks everything its touches into the Warp. Vortex missiles are constructed by using Psykers to channel the raw energy energy of the Warp into an intercontinental ballistic missile.[5] Vortex missiles mounted on Deathstrike Platforms are so valuable that they are guarded at a minimum by an entire infantry platoon, charged with concealing the weapon from enemy saboteurs and kill-teams. Nominally only Segmentum Command can sanction their use, and the launch codes are entrusted solely to the Lord Commissar in charge of the missile, as only these individuals combine loyalty to the Imperium with the resolution to fire this doomsday weapon at any cost.[2] Vortex missiles like other support missiles mounted on Titans take up one carapace slot, although if it is destroyed before being fired it will prematurely activate and create a vortex field.[4]

Due to the dangers of assembly and the uncontrollable forces involved, it was once the sole responsibility of the Adeptus Mechanicus to manufacture vortex missiles. By the end of M31, they were officially only to be constructed on Mars, Graia and Gryphonne IV. There, the warheads would then be exported to other forge worlds where they could be combined with their missile housings, before being distributed to the necessary regiment or fortification. Because of a clerical glitch of the Departmento Munitorum, other forge worlds soon began constructing whole vortex missiles. By M35, almost all forge worlds in the Imperium had at least some expertise in its assembly.[5]