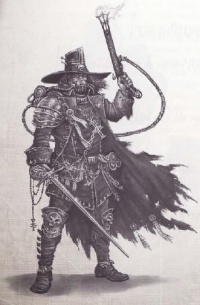 Vownus Kaede is an Inquisitor of the Ordo Hereticus. A noted scholar and philosopher, he is surprisingly optimistic for his order. He is also known to be a skilled swordsman, scoundrel, and self-righteous reprobate. His true origins are unknown, and his name itself is derived from the Catuldynus epic The Once-Pure Hive. Originally in the employ of a Rogue Trader, the story of his rise through the Inquisition is hazy and unclear. He was however originally a member of the Ordo Xenos before finding his true calling as a Witch Hunter in the Calixis Sector's Tyrantine Cabal.[1]

Though nominally a Puritan, Kaede is a skilled Psyker and believes that the psychic are the future of the Human race. He is known as an avid Witch Hunter, but he has an eye for talent and will frequently save promising Psykers from Rykehuss' pogroms.[1]

He is known for his distinctive Witch Hunters hat, Inferno Pistol, and the Power Sword Slight Jest.[1]