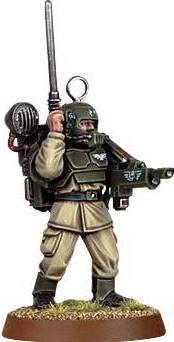 A Cadian Guardsman with a vox-caster.[1]

The Vox-caster is a piece of Imperial technology used by the Imperial Guard to communicate orders over long distances.[2] It is also useful for projecting the leadership of a command unit to the rest of the army, especially if the Vox-caster in the command squad is upgraded to a Master-Vox, although the effects of equipment like standards are not transmitted due to the need to see the standard to gain faith from it. When using the Master-Vox, it allows the commander to send multiple messages to the squads opposed to a normal Vox-caster which can only send one message at a time.

The Vox-caster replaced the Comm-Link in the Imperial Guard.[Needs Citation]

Units that make use of a Vox-caster or Master-Vox include: