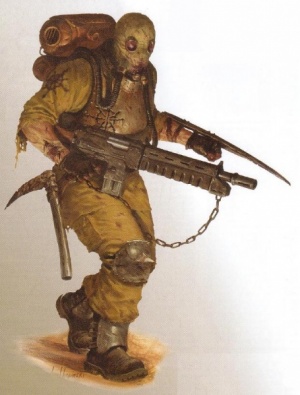 A soldier of the Vraksian Renegade Militia

The Vraksian Renegade Militia were the primary planetary forces of the Siege of Vraks and were are a motley assortment of Planetary Defence Force troopers, garrisoned Guard auxilia from the planet Vraks, indentured Labour Corpsmen, frateris militia, and local soldiers, who rebelled against the Imperium whilst under the sway of heretic Cardinal Xaphan. After the previous Cardinal of the Scarus sector in Segmentum Obscurus died, his successor, Cardinal Xaphan took his place. Over the course of many years, Xaphan undertook a pilgrimage of the Scarus sector, his new domain. He wished to see the places he would preside over, and he wished to bring a spiritual revival to the people. Where he and his entourage passed, he amassed ever more followers in a series of religious uprisings. Criminal governments and oppressive controls were shattered with each world he travelled to. Whispering into his ear was the Cardinal's favored advisor, Deacon Mamon. After years of pilgrimage, Xaphan went into seclusion on the Imperial armoury world of Vraks, also the site of a popular Imperial Cult shrine. Here, Xaphan chose his battlefield. Believing that corruption was eating away at the Imperium, he thought himself a messianic figure destined to ignite a holy war and give the faithful a chance to purge the galaxy of darkness. Believing the Cardinal to be amassing far too much popularity and power, an agent was sent to assassinate Xaphan during one of his sermons. After the failed attempt on his life by an operative of the Officio Assassinorum, the armoury world of Vraks erupted in full scale rebellion. It wasn't long until the Citadel and the mechanisms of the armoury world were under Xaphan's control.[Needs Citation]

By seceding Vraks from the Imperium, Imperial forces in the sector and, in some cases, the entire segmentum, would be left without adequate resupply of arms and armour. By breaking the supply chain of which Vraks was a part, forces as far removed and important as the Cadian regiments guarding the Eye of Terror would be sparsely armed were a major incursion to occur in or around the Cadian Gate. The Administratum deemed that the world would need to be returned to the Imperium's fold.[Needs Citation]

When word had been received of Vraks' treachery, it was already too late. Millions of traitors were now dug into meticulously planned, constructed, and reinforced defences, with massive orbital lasers protecting the Citadel from orbital bombardment and assault. It fell on the Guardsmen of the Death Korps of Krieg to dislodge the traitorous forces of Cardinal Xaphan in what would become a grinding war of attrition that would consume millions of lives during over a decade of battle.[Needs Citation] 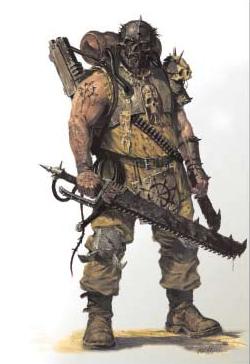 The Renegade militia had a structure similar to that of most Imperial Guard armies throughout the Imperium. Although, instead of seasoned officers leading the rank and file, loyal champions replaced much of the militia and PDF command structure at the apex of the rebellion. Manning the forward trenches were countless disorganized platoons of militiamen, armed with heavy weaponry at key points in the defensive lines. Supporting them were artillery in the form of Basilisk batteries, Bombards, Manticores, Medusa, and Griffon mortars. Misdirection and misinformation were tools in convincing the militia to do battle against the implacable forces of the Imperium. Some soldiers still believed they were fighting for the Emperor, while others had embraced Chaos and their leaders' new ideals. To keep the unwilling in line and force them to war, brutal Enforcers were assigned to watch over the militia. When a champion faltered in his faith, or a soldier tried to flee, an Enforcer would be there to send the message that Xaphan would not tolerate failure.[Needs Citation]

Some of the more eclectic soldiers of the heretic Cardinal included Rogue Psykers released from the deep dungeons housed beneath Vraks' Citadel. These unbound mystics were dangerous in that they were beacons for Chaos energies, and were often possessed by the entities flooding the Warp. These troops proved both powerful and unpredictable, but almost always wreaked havoc disproportionate to their numbers. Following the militiamen to war were also the Cardinal's corrupt Preachers, subtly manipulating the soldiers into Chaos worship and having faith in the holy war they had little choice but to fight in. One of the more terrifying weapons utilized by the Renegades were specialized Ogryn soldiers. After the insurrection, the Cardinal's staff ordered the Ogryn to be rounded up and sent to Medicae facilities for adaptation. Subjected to horrific surgeries and implantations, the Ogryn came out as blood-mad suicide troops, unable to think beyond a single instinct; to kill before slain in turn. Each implanted with a cocktail of combat drugs, the Ogryn Berserkers were terrible and formidable enemies for the Death Korps. It was not uncommon for a single Berserker to kill fifteen Krieg Guardsmen before being slain or simply collapsing from the lethal cocktail of combat drugs. At the very bottom of the pile were the endless hordes of Xaphan's fanatics and the untrained masses of Vraks' Labour Corps. These highly expendable troops were thrown en-masse at the enemy when applicable. Although poorly trained and armed, they would either force the foe to expend their ammunition prior to a full scale attack or the horde would bury them in a flood of bodies.[Needs Citation]

Shortly after the siege had commenced, a warband of Alpha Legion Chaos Space Marines had infiltrated on Vraks and through Imperial lines. Led by the Chaos Lord Arkos the Faithless, who aided the Cardinal in orchestrating his rebellion, the Vraksians received a powerful ally. Veteran soldiers of countless wars, the Chaos Marines of the The Faithless would become a powerful weapon as the siege wore on.[1]

At the height of the Siege, nearly twelve years into the war, battle was joined by numerous Chaos Space Marine warbands, specifically sub-factions of the Death Guard (Lords of Decay, The Tainted, Apostles of Contagion, and The Purge), World Eaters (Skulltakers, Berserkers of Skalathrax), and the Word Bearers (The Sanctified), and elements from the Iron Warriors (Steel Brotherhood) and the Black Legion (Black Brethren of Eyreas). Summoned by a psychic signal sent out by Arkos the Faithless, these immortal soldiers of the Chaos Gods' proved a great boon to the beleaguered defenders of the Renegade Militia. After the crashing of Aharon's Bane (a massive transport tailgating the Chaos fleet in orbit above Vraks), the Renegades were joined by a vast horde of pirates, mutants, and other degenerate scum pulled from every corner of the known galaxy. Along with this horde came the Warhound Titans of the Legio Vulcanum, massive constructs from the Horus Heresy, now possessed and deadly as ever. As the Imperial attackers neared the Citadel, packs of mastiffs once used to control unruly Labour Corpsmen were pressed into use for war. Lead into battle by Renegade Ogryn handlers, these slavering beasts were more than a match for most Guardsmen in close quarters.[2]

Having access to the vast stores on the armoury world of Vraks, the Renegade Militia had access to a plethora of weaponry and armoured vehicles. Mothballed tanks and endless underground supply depots left the Vraksians in a very good position to fight the impending war. Your average militiaman wasn't especially well armed, relying on the less popular autogun in many cases, instead of the simple to use and maintain lasgun popular with active Imperial Guard regiments. In addition to the autogun or autopistol, many militiamen effected crude melee weapons by fashioning stabbing tools from scrap metal and some labour corpsmen relied on mining picks and rock drills for close quarters combat, the sort frequently experienced during the trench warfare common during the siege. These same militia generally had to fashion their own armour, crude and cumbersome as it was. Despite the inferior materials and decrease in efficiency, it offered protection on par with the flak armour issued to many Imperial troopers across the sector. More well equipped militia had access to every weapon an Imperial soldier might have, from plasma weaponry, mortars, demolition charges, and the flamethrowers commonly used to storm trenches during a counter attack. The Cardinal's Champions and Disciples had access to many of the more exotic items, including plasma pistols, sniper weapons, power weapons, and powerfists as well. One universal item carried by each Renegade was a rebreather, whether unsophisticated or complex. In the harsh, sulfurous atmosphere of Vraks, those without breathing equipment suffered a lingering death.<[1]

Supporting the eight million or so soldiers in the Vraksian militia, rows upon rows of artillery batteries had been meticulously placed to rain death on any advancing force. Popular tanks such as the Leman Russ saw common use, generally thrown into the grinder to repel infantry assaults against the Vraksian defensive lines. A popular choice of many Renegade commanders was the Malcador, used to spearhead many assaults into No Man's Land. Although of a more antiquated design, these sizeable war machines were more than able of raking infantry formations, disabling enemy armour, and laying down a curtain of explosive fire upon the Imperial attackers.[2]