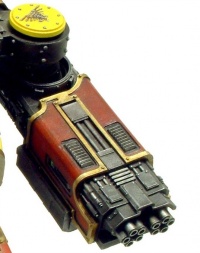 The Vulcan Mega-bolter is a large weapon usually found mounted on Imperial Titans and other Super-Heavy Vehicles.[2a]

The weapon consists of twin-linked, heavy caliber, multi-barrel rotating Bolt gun barrels capable of firing shells at 300 rounds per second, making it a highly effective anti-personnel weapon.[1][2b] The roar of the Vulcan while firing has earned it the nickname "laughter of the devil" amongst Titan crews.[2a]

The Vulcan is larger and more powerful than even Space Marine Heavy Bolters, each shell able to blast a meter-wide crater in stone and steel.[3a][4] Thus the Vulcan can be used to destroy buildings and light vehicles, although it lacks the penetrative power to defeat bunkers and other heavily-armoured targets.[2b][5] Still, the sheer force of continuous impacts from a Vulcan can even knock a Land Raider sideways.[5] Imperial Titans have also been known to use Vulcans on each other when being assaulted by infantry: boarders are torn to pieces in a storm of bolt rounds while the friendly Titans suffer minor damage.[3b] If the Vulcan has one deficiency it is that it's highly inaccurate, although precision is not needed for a weapon which can fill several hundred square meters with exploding death.[6]

The Mega-bolter is commonly found on as an arm-mounted weapon on the Warhound Scout Titan or on the carapace mounts of a Reaver and Warlord Battle Titan.[1][2c] The Imperator class titan can also carry one or more Vulcans on its carapace hard-points.[8] The Imperial Guard Stormlord super-heavy tank also mounts a Vulcan mega-bolter as its main armament,[9] as can a variant of the Macharius.[2] They are also mentioned as being mounted on warships as point-defense weaponry.[7]

A variation of the Vulcan Mega-bolter is the Adrex Defensor Mega-Bolter which is found on the Dire Wolf Class Titan.[10]