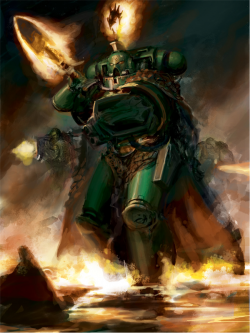 Since his earliest days as a Scout, He’stan had been a much-noted warrior. He alone of his recruiting class captured a unique beast. For his mantle he slew a mottled tri-horn, amongst the most vicious and cunning of their reptilian breed. Even teams of veteran drake-hunters might struggle to accomplish such a deed. He’stan skills as a smith – working his hammer upon the anvil – were such that the master artificers stopped over his works and admired them.[5]

He'stan was originally the Captain of the 4th company and served in that role for a century. The Chapter Council then called him to set aside his duties as captain and become the Forgefather. As he let go of his old duties, he also received a new name; Vulkan He'stan. As a result, he lost his original name.[1]

As Forgefather, He'stan has worked his way from system to system in search of the nine artefacts of Vulkan, his only clues coming from the Tome of Fire, which is extremely difficult to interpret, let alone put into use. Instead of calling solely on members of the fourth company, He'stan can call on any number of Salamanders to aid him in his quest. The Salamanders are more than happy to cleanse an area of a world on a rumour that a piece of their history is there.[1]

He'stan accompanied Herculon Praetor and the Firedrakes when they went in pursuit and rescue of Chaplain Elysius, to retrieve Vulkan's Sigil. During this time they battled the Dark Eldar and had to infiltrate the webway and a Dark Eldar city, where it was revealed that the Forgefather knew the language of the enemy.[2b]

The Necron warlord Trazyn the Infinite has attempted to obtain the Artifacts of Vulkan for himself, but He'stan defeated Trazyn in personal combat in 878.M41 and again in the Tochran Crusade in 943.M41[3]. In the wake of the Great Rift's creation, many believe He'stan's quest is now impossible to complete. The Forgefather, however, thinks this a test by Vulkan to fully temper his sons, before the Primarch rejoins the Salamanders[6a]. He is now journeying to the world Zero, as He'stan believes it contains a clue to the location of the Unbound Flame.[6b]

He'stan carries three of the nine relics left behind by his namesake and Primarch: