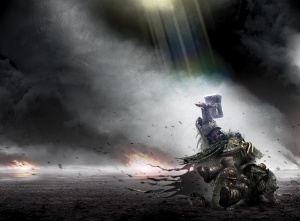 Vulkan Lives is the 26th novel in the Horus Heresy Series written by Nick Kyme. It was later included in "The Novels: Volume 6" eBook collection.

In the wake of the Dropsite Massacre at Isstvan V, the survivors of the Salamanders Legion searched long and hard for their fallen primarch, but to no avail. Little did they know that while Vulkan might have wished himself dead, he lives still. As the war continues without him, all eyes turn to Ultramar and Guilliman's new empire there, and Vulkan's sons are drawn into an insidious plot to end the Heresy by the most underhand means imaginable.

Vulkan, primarch of the Salamanders Legion, finds himself a prisoner of Konrad Curze's, primarch of the Night Lords, after the events of the Isstvan V Dropsite Massacre. Climbing out of his cell he escapes his imprisonment only to discover that he is on board Curze's flagship when he breaks through an airlock and is sucked into space.

Erebus, Dark Apostle of the Word Bearers, returns to his ship badly wounded after daring to criticise Horus (see Fear To Tread) and collapses into the arms of his subordinate Valdrekk Elias while muttering about weapons. Elias willfully interprets this as an order to recover an ancient weapon from the planet Traoris and travels there with a contingent of Word Bearers including an indebted former Scout Marine Barthusa Narek. John Grammaticus, a Perpetual and agent of the Cabal, excavates a fulgurite spear from the ruins of a Chaos fortress on Traoris as the planet falls to massed cultist uprisings. Fleeing the site his team are killed by unseen pursuers and Grammaticus hides in a warehouse, where he drops the fulgurite upon being confronted by a Word Bearer but is saved and taken captive by a team of Shattered Legions survivors who have come to Traoris to assassinate Elias.

Vulkan awakens in another cell and experiences visions of his dead brother Ferrus Manus. He suffers many torments at Curze's hands including incineration and being unable to prevent the crushing deaths of human prisoners, but despite suffering many different fatal wounds always 'reawakens' in a different cell to face a new torture. He eventually learns that he is immortal after Curze breaks down at a corpse feast and reveals his frustration at being unable to kill him before ramming a fork into Vulkan's heart.

On Traoris the Shattered Legions survivors, led by Pyre Guard commander Artellus Numeon and including Iron Hands sniper Verud Pergellen, Raven Guard Librarian Hriak and Numeon's fellow Pyre Guard Leodrakk interrogate Grammaticus about his purpose on Traoris, but are only partially succesful thanks to wards placed on his mind by the Cabal. He reveals to them that Vulkan is alive, but they think he is lying. Barthusa Narek leads an attack on their location which interrupts the interrogation, but the Shattered Marines retreat and set a trap that kills four Word Bearers. Narek and a fellow sniper seek to even the score by killing four of the Shattered Marines in a second attack, but while they kill two Salamanders and a Raven Guard the fourth shot, intended for Leodrakk, deflects off his armour when Numeon tackles him to the ground and hits Grammaticus instead, mortally wounding him. Narek takes the fulgurite back to Elias, who reveals that it is a fragment of the Emperor's psychic lightning solidified into rock, and plans to use it in a ritual to convert Traoris into a daemon world. He begins systematically slaughtering the population of the city to power the ritual while Narek takes a kill-team to eliminate the Shattered Marines.

Vulkan continues to be tortured by Konrad Curze, now aware that he has been dying and coming back to life and that the torture will never end. The tortures become a battle of wills between Vulkan and Curze, Curze seeking to prove that Vulkan is a merciless killer like him while Vulkan maintains his defiance. Forced into a battle-machine Vulkan is helpless to prevent it killing captured Imperial Army soldiers and Raven Guard, but manages to turn one of its weapons on himself rather than kill a captured Salamander. Coming back to life he is rescued by Corax and an elite team of Raven Guard who lead him on a circuitous route back to their ship, but they are discovered by the Night Lords and the fight turns suicidal when they find their ship destroyed. Falling into a trap, Vulkan and Corax are forced to fight to the death by Curze, but though Vulkan gets the upper hand he refrains from killing his brother. Coming to he finds that the entire rescue sequence was a vision planted in his mind by Davinite psykers, whom Curze slaughters for failing to produce an outcome whereby Vulkan murdered Corax.

The Shattered Marines make a new base at a manufactorum where despite Techmarine Shen'ra's efforts Grammaticus dies. Coming back to life again he receives a psychic message from Eldrad Ulthran who asks him to help save Vulkan. His resurrection persuades Numeon to believe that Vulkan is alive. Elias's attempt to open a conduit to the Warp fails when he loses control of the fulgurite and it burns his arm to the bone. Erebus announces that he is coming to Traoris and orders Elias to bring him Grammaticus and the fulgurite. Narek leads an attack on the manufactorum and several marines are killed on both sides, but Shen'ra detonates a bomb that allows the remaining Shattered Marines to retreat into the sewers where they plan an ambush for the Word Bearers. Shen'ra sacrifices himself as part of the plan but Numeon recovers the fulgurite while Grammaticus is spirited away Hriak and Pergellen. Narek saves Elias from the ambush and terminates their partnership before going after them. Numeon inspires faith in the surviving marines that 'Vulkan lives' before the group venture out into Traoris's wastelands. Leodrakk leads a diversionary assault on the city's spaceport and dies in a last stand while Numeon and Hriak take Grammaticus to safety. Pergellen covers for them but is found and killed by Narek. Grammaticus burns out Numeon's eye with his digital ring and takes the fulgurite in order to complete his mission, Numeon goes after him but is mortally wounded by Elias. Unable to fight back Grammaticus surrenders the fulgurite to Elias, but is saved when Erebus arrives and executes Elias for seeking to supplant him before allowing Grammaticus to leave and carry out his mission, which is revealed to be the assassination of Vulkan.

Placed in Curze's final trap, an iron labyrinth built by Perturabo, Vulkan finds his way to the center which contains his force-hammer, Dawnbringer. Curze engages Vulkan in a final fight. Barely holding onto his sanity after all he has been through, Vulkan gets the upper hand and uses Curze's body to smash the force-field surrounding the hammer, but Curze reveals that he knows the hammer has an in-built teleportation device and has shrouded the room so it will not work. Vulkan uses the hammer to beat Curze into submission and nearly kills him, but refrains after realising it is what Curze wants. He then reveals that the teleporter in the hammer will work despite Curze's efforts and uses it to escape the ship. Materialising high in the atmosphere above an unidientified planet, Vulkan is burnt to a skeleton as he plummets towards the surface and appears to die for good.