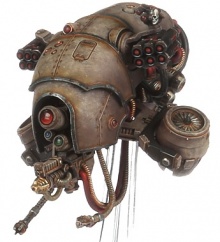 The Vultarax Stratos-Automata is a type of robot used by the Adeptus Mechanicus.

The Vultarax was the most common Stratos-automata in widespread use by the Mechanicum at the outbreak of the wars of the Horus Heresy. A robust, multi-role war engine, heavily armed and fitted with sophisticated sensory gear and able to operate in diverse and hostile environments, it proved itself a keystone of Mechanicum Explorator Expedition forces both as an armed, high mobility scout and as a hunter-killer and rapid response unit in open battle. The Vultarax was armed with a Vultarax Arc Blaster and two Havoc Launchers. These armaments alongside it's impressive armor, flare shield and enhanced targeting array, make the Vultarax a formidable force on the battlefield.[1]

The Vultarax closely resembles the Chaos Blight Drone of the 41st Millennium.