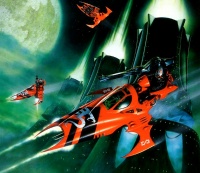 Vypers are larger versions of the Eldar Jetbike which act as mobile weapon platforms.

First created by artisans of the Saim-Hann Craftworld, these light skimmers operate in support of Guardian Jetbike Squadrons and other jetbike-mounted units. Unlike the standard jetbike Vypers are piloted by two crew, a gunner and a driver, who share a psychic bond which allows them to better coordinate their actions; it is common for Vyper crews to be blood relatives. Vypers are not heavily armoured, relying on their blistering speed rather than any amount of plating, but mount weapons more commonly found on larger battle tanks: in addition to twin-linked Shuriken Catapults, which can be replaced with a Shuriken Cannon, the rear heavy weapons mount can carry a Shuriken Cannon, Eldar Missile Launcher, Scatter Laser, Starcannon, or Bright Lance.[1][2a][2b]

Vypers are often grouped into squadrons of one to three vehicles, which when well-trained act as one, capable of redeploying in seconds to find the vulnerable spots in enemy armor or escape interceptors attempting to close with it. Notoriously reticent to close with the enemy, Vypers work best at a range. They can also be upgraded with Vectored Engines, Star Engines, Holo-Fields and Spirit Stones.[2a][3]