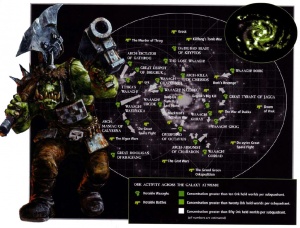 A galactic map of Ork Waaaghs! in late M41

Waaagh! as a Psychic Field

A gathering of Orks generates a psychic field known as the Waaagh!, which allows Orks to instinctively recognize who is "bigga" and therefore in charge. [Needs Citation]

During the War of the Beast, members of the Adeptus Mechanicus noticed how Ork weapons only seemed to activate when they came into contact with a Greenskin.[1b]

Waaagh! energy can also be manipulated by the Weirdboyz in an array of deadly psychic powers.[Needs Citation]

Waaagh! as an Event

Waaagh! also describes the rare occasions when Orks stop fighting amongst themselves and band together against other races. This undertaking combines the aspects of a mass migration, a holy war, a looting party and a pub crawl, with a bit of genocide thrown in for good measure. In a typical Waaagh!, millions of battle-hungry Orks invade their target and stomp everything in their way flat. Just who is invaded is a matter of supreme indifference to the Waaagh!; battle is battle.[Needs Citation]

Waaagh!s naturally gain in size and impetus as long as they're successful and have something to fight. As the Waaagh rages on, more Orks will hear of the fighting and travel to where the action is. Thus, the longer a Waaagh goes on the more numerous it becomes.[Needs Citation]

Waaagh! as a Group

The third use of Waaagh! is the name for the massive horde of Orks gathered under a single Warboss - an individual Ork who is invariably the largest, most dominating and physically intimidating, and therefore able to unite different warbands of Orks into a horde, almost always for the purpose and duration of undertaking a Waaagh! in the second sense of the word. Very often the Waaagh! is named after this warboss.[Needs Citation] The Waaagh! of The Beast was so powerful that its effect influenced all of his Orks to grow far larger and more aggressive than normal. Even a standard "Beast Ork" Boy towered above a normal Greenskin.[1a]

A Waaagh! is typically dispersed at its defeat, the death of its Warboss or simply when it runs out of enemies. The combined warbands and tribes will then break up through infighting and inter-clan rivalry. Exceptions do occur: a particularly dominant Warboss occasionally manages to hold his boyz together, forging a small empire for himself. The best example of this is the Ork empire of Charadon, which has survived for thousands of years under the rule of successive Warlords.[Needs Citation]

The current most notable instigator of Waaagh!s is Warlord Ghazghkull Thraka, responsible for the Second and Third Wars for Armageddon.[Needs Citation]

Lastly, "Waaagh!" is the near-universal war cry roared by Orks in battle.[Needs Citation]

When used as a war cry, the length of the term used can vary, usually indicated in print by a greater number of "a"s.[Needs Citation]

In earlier Games Workshop publications, the term Waaargh! is used.