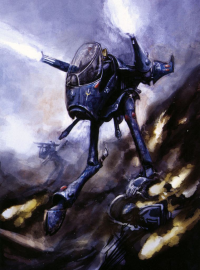 A War Walker is an a versatile Craftworld Eldar bipedal vehicle used as a light reconnaissance and weapons platform, akin to the Imperial Sentinel but with superior agility and firepower. Operating with the same grace of movement as its single pilot, the War Walker is particularly useful operating through difficult terrain, however, its lack of armouring makes it unsuited for fighting in the midst of heavy combat.[1][2a][3][4]

Standing three meters tall, the War Walker is the smallest and lightest of the Eldar's many walking war machines. It is controlled by a single pilot who merges with its wraithbone core, entering a type of meditative state to become one with the machine; piloting a War Walker is often an Eldar's first step to eventually becoming the steersman of a Titan. The pilot is assisted by a myriad of advanced support and failsafe systems, including the use of Spirit Stones in some cases, while advanced gyroscopic-stabilization and articulated legs allow them to traverse even the roughest of terrain. The War Walker is fitted with a pair of heavy weapons, either Brightlances, Scatter Lasers, Shuriken Cannons, Starcannons or Missile Launchers, giving it the versatility to fulfill multiple roles. In order to preserve its mobility the War Walker lacks armour, though the pilot is protected by an array of shimmering force fields. These not only protect against enemy fire but blur and distort the machine's outline and location, giving it the same level of protection as a fully-enclosed vehicle.[3][4]

Deployed in squadrons of one to three machines, War Walkers are first and foremost scouts, typically operating ahead of the main Eldar host in order to locate enemy positions. Once that mission is accomplished they are then used to provide suppressive fire for Aspect Warrior and Guardian squads; a full squadron can often wipe out an entire enemy platoon in a single volley. However, when operating in this role War Walkers often exposes them to enemy fire, which can lead to heavy losses.[3][4]

Eldar Corsairs also commonly use War Walkers in their raids against the lesser species, valuing the machine's mobility and heavy firepower, but also employ a variant known as the Wasp Assault Walker more suited to air-mobile 'drop' squads.[4]