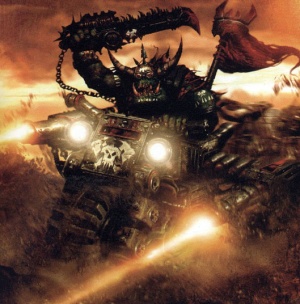 Warbikers typically have a specific set to their features, especially after a really good battle. Their lips are drawn back in an ecstatic smile and their bloodshot and unfocused eyes are opened frighteningly wide. They seem to shake for a good hour or two after leaving the saddle, for suspension is unheard of in Ork vehicles. Even in times of peace, Warbikers have a tendency to let loose the occasional whoop or cackle as they relive their battles[10].

In battle, Warbikers function as outriders and shock troops for the main horde. The screen of exhaust fumes thrown up by their vehicles helps obscure their advance, giving them a measure of protection from enemy fire. Some Warbiker tribes have even been known to use controlled skids to communicate messages to their fellow warriors by sending up clouds of dust. The Flaming Skull tribe go one step further, and are allegedly able to synchronize their skids so precisely that when enemy aircraft pass overhead they are greeted by a trail of smoke and dust that spells out "ZOG OFF".[10]

Warbikers go into battle heavily armed, with their bikes usually mounting Dakkaguns while the riders themselves wield Sluggas, Choppas, Power Klaws, and Stikkbombs.[10]