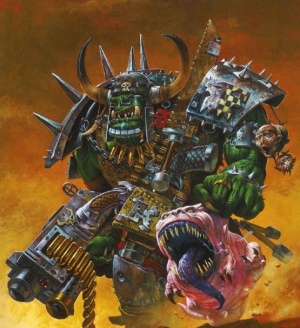 The Warboss is the highest position in a large Ork Waaagh!; he is always the biggest, strongest and most cunning Ork in any given grouping of such creatures, and gets the best armour, weapons, and equipment.[2]

He is easily distinguishable from his brethren because of his bossy nature and tendency to be over nine feet (3 meters) tall. As a general rule of thumb, the more successful a Warboss is, the larger he is.[2]

In battle a Warboss often directly leads his tribe, and is a force to be reckoned with himself. Warbosses commonly keep a group of Nob bodyguards, Gretchin ammo haulers, and a pet Attack Squig around, making them even more formidable in combat.[Needs Citation]

If a Warboss is killed, the largest Nob of the tribe will take the Warboss's place, usually only after brutally restoring order among the tribe and establishing himself as the new Warboss. This works effectively out of combat, as things have time to sort themselves out through duels and challenges by would-be successors, but sometimes Ork Nobs fall upon one another during a battle, effectively destroying any sort of cohesion that the original Warboss had among the tribes under his command. Many an Ork invasion has been repelled due to killing the Warboss combined with a swift counter-attack, but such an action should never be thought of as a perfected method of fighting greenskins.[Needs Citation]

Warbosses sometimes have a variation of titles depending on their place in Ork society.[2]

Warlords and other titles

Particularly dominant and successful Warbosses are called "Warlords" or "Great Bosses". Tribe after tribe will flock to such a prominent leader, forming a massive Ork horde. The most notorious Warlord is Ghazghkull Thraka, who almost all Orks revere, that is, if they are smart enough to.[Needs Citation]

The most powerful and successful Warbosses may instead refer to themselves by a unique and impressive title of their own devising, such as the "Arch-arsonist" of Charadon.[Needs Citation]

Warbosses wield a wide array of wargear, with little variation existing. He will always wield a formidable array of weaponry, a necessity to reinforce his position to other Boyz. As the biggest and meanest Ork, he will always have the best spoils of war and access to the best equipment Mekboyz can provide. Often, Warbosses will ride transports such as Battlewagons or Warbikes to the frontlines.[2a]