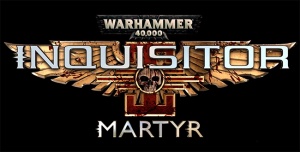 Warhammer 40,000: Inquisitor – Martyr is an action-RPG video game developed by the Hungarian-based NeocoreGames. The game allows players to play as an Inquisitor. The game was originally due for release in 2016 for PC, Mac, Xbox One, and Playstation 4 but was delayed until 2018.[1]

NeocoreGames describes Warhammer 40,000: Inquisitor – Martyr as a “persistent sandbox action-RPG” and explains that the single-player campaign will thrust players “into a grim and secret war among the stars as the agents of the ever-vigilant Inquisition.” NeocoreGames also promises that, after the campaign concludes, the story will continue “in a colossal sandbox game” that the developer claims will give players “years of constant entertainment, gradual development and a continuous flow of content that enriches the action-RPG gameplay.”[1]