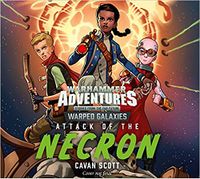 Attack of the Necron cover art

The announcement of Warhammer Adventures met with mixed reaction among the traditional fanbase of the Warhammer 40,000 hobby. Many fans responded negatively to the announcement, citing that a children's story has little place in an intrinsically dark setting filled with violence, Daemons, and brutal autocracy. Fans cited the character of Zelia Lor as an example of the inherent problems with the concept of a children's friendly Warhammer 40,000 series, wondering how a character who dislikes weapons could possibly survive in the 41st Millennium where according to Games Workshop There is only war.[2]

At the same time, the reaction from many fans was also supportive. They saw it as a positive way to encourage new fans into the hobby in an appropriate way, cited its positive inclusivity, and noted many expressed the opinion they wished these had been available when they were younger. They also countered the view that this would in any way 'dilute' the main line, arguing that there was no evidence whatsoever that this was happening.[3]