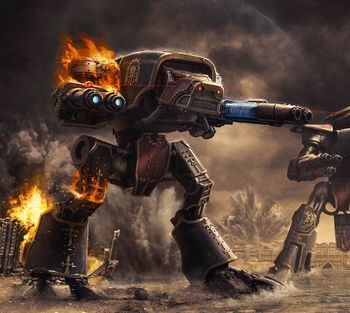 The Warhound Scout Titan is the smallest class of Imperial Titan. With the deployment of a full Titan Legion, Warhounds are commonly used to reconnoiter ahead of the Battle Titans and draw enemy war machines towards them. Despite its designation as a scout, the class is formidably armed.

Warhound Titans are primarily designed to perform reconnaissance missions and terror raids deep behind enemy lines. As the eyes and ears of the Legion they typically range far ahead of the main battlegroup and operate in pairs in order to outmaneuver larger Titans they might encounter. In major engagements they prefer to operate on the flanks and seek out "soft" targets such as enemy infantry and Battle Tanks against which their lighter Titan-grade weapons can cause immense damage.[1][2b]

Warhounds are also consummate ambush predators. Where most Titan combat might take place at ranges of five kilometers or greater, Warhounds can lay in wait for their prey to come closer and engage at point-blank range.[3f] This potentially allows them to defeat larger foes on their own; a Reaver Battle Titan might tonne for tonne outclass a single Warhound, but using surprise the smaller engine is more than capable of killing its larger foe.[3g] The Warhound's ability to go from idle, with main drive and systems shut down and the powerplant almost asphyxiated,[3c] to full sprint in less than twenty seconds and crash through stone walls three times its height helps in this regard.[3d]

With their emphasis on speed and agility over strength Warhounds are considered lightly armed and armoured for Titans, protected by just two Void Shield generators and limited in their selection of weaponry.[1] The result is that enemy infantry and tanks can actually pose a serious threat to these war engines without proper support.[4] However they are still very dangerous and deadly engines. Warhounds can unleash more firepower than over a dozen squads of Imperial Guard could hope to muster.[5] Their void shields are capable of sustained bombardment from weapons which would destroy normal battle tanks in a single hit.[2a] Sustained bombardment from a battery of Basilisks will eventually topple one over.[7a] Warhounds have even been known to survive a direct hit from a Volcano Cannon, though the force of the blow will knock them sideways and their shields will be heavily damaged.[3e] In other cases such firepower will result in the Titan's catastrophic destruction, leaving behind nothing but a pair of legs.[7b] In general enough firepower to level a city block will pulverize a Warhound.[6b]

As in other Titans a Warhound's crew consists of devout members of the Adeptus Mechanicus. The Titan's commander is known as a Princeps, charged with overseeing all aspects of the war engine's functions through a Mind Impulse Unit.[2b] The MIU link also allows the princeps to commune with the Titan's "Machine Spirit," an intelligence which guides and assists in operations. Such spirits, as old as the veteran war engines themselves, are often surely and cantankerous, resentful at being woken and forwards in following commands. These qualities, likened by some to having to bring to heel a ferocious dog, are also what make Warhounds so murderously effective.[3a]

As in other Titans a Warhound princeps comprehends their war engines and realise the surrounding environment through the Manifold, an immerse and interactive sensory space and the hard-plug equivalent of the Noosphere.[3a] It also results in the princeps unconsciously aping the posture of the Warhound in action,[3c] while damage taken by the Titan can appear as psychosomatic welts on their body.[3d] A wealth of sensory data is viewed through the Manifold, normally paired down the the four essentials of detecting heat, motion, mass, and code activity, and can be data-streamed back to the Legion.[3b] For example, a Warhound can pick out the heat signature and power source of a Land Raider anywhere within one kilometer of its position.[9]

The princeps sits in the forward cockpit along with two Moderati who assist in piloting the Titan: the first functions as the driver and navigator while the other commands the weapons and sensors. In turn each one controls the Warhound's remote servitor-slaves, which are hardwired into the war engine's weapons, void shield generators and engineering system. The final crewmember is the Techpriest situated in the engine room behind the main cockpit, tasked with overseeing the smooth running of the Warhound's plasma reactor.[2b] All are hard-plugged into the Titan and make use of hard-switches, as subtle haptics and noospheric links are considered too easily compromised or damaged for controlling the Titan in the midst of combat.[3a]

Some models of Warhound can have a complement of twelve crew.[6a] 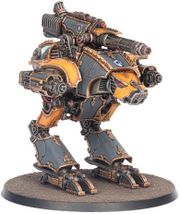 The Wolf Class Titan configurations always operate in packs of two, specializing in finding and hunting down enemy forces.[8]

The Mastiff Class Titan pattern of Warhounds are not as nimble or as well-protected as the Wolf, being equipped and configured to act as solitary vanguards. Mastiffs specialize in flanking enemy positions to sow confusion with well-planned hit-and-run attacks.[8]

The Jackal Class Titan pattern of Warhounds are similar to the Mastiff, being used in the same role but having heavier Void Shields so that it may better engage foes at a closer range. Because of this the favored weapons of Jackal Princeps are the Inferno Gun and Vulcan Mega-bolter.[8]

The Dire Wolf Heavy Scout Titan is a variation of the Warhound designed around heavy firepower.[15] 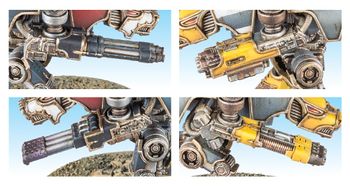 The Warhound has two weapon mount hardpoints. The multi-configuration nature of these mounts means armament can be tailored on a mission specific basis. However, most Titan crews will develop their own particular style of combat and so tend to stick to certain configurations. In addition, each pattern of Titan is built with a Standard Weapon Configuration, which in the case of a Mars-pattern Warhound is a Plasma Blastgun and Vulcan Mega-Bolter.[10] In total there are four different weapons a Warhound can mount in either arm:

Two Warhound Scout Titans have guarded the Eternity Gate, the sole and final entrance to the Sanctum Imperialis and the Emperor's resting place, for thousands of years.[13]