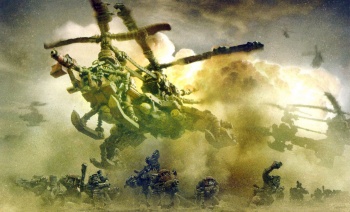 Not as common as their Deffkopta cousins, Warkoptas are geared less towards raining destruction down upon the enemy and more towards delivering as many Boyz to the battlefield as possible. It is a combination gunship, aerial transport, heavy lift and long range reconnaissance vehicle. These intricate and more than slightly crazed flying machines are favoured by Ork Kommandos in order to get behind enemy lines with the added bonus of being able to shout insults at the footsloggers down below as they fly over their heads. They are also popular with Goffs who use them to deal with those tricky-to-kill fliers.[1][2]

Ork Big Meks consider Warkoptas a more prestigious accomplishment due to their large size and complexity. They feature two huge rotor blades at either end of a long open fuselage, with a cluster of rokkit jets on one side and a cunning steering system on another. Though they are primarily designed around troop transportation, they none the less pack a heavy armament of twin-linked Deffguns, a nose-mounted Big Shoota. Some of them may feature a Skorcha, Rokkit Launcha or Kustom Mega-Blasta instead of Big Shoota or even powerful twin-linked Rattler Kannon instead of the Deffguns. Some Meks equip Warkoptas with Big Bombs. Warkoptas are usually deployed in squadrons up to three vehicles, sometimes with support of Deffkoptas.[1][2]

The nickname Chinork derives from the American helicopter, the CH-47 Chinook