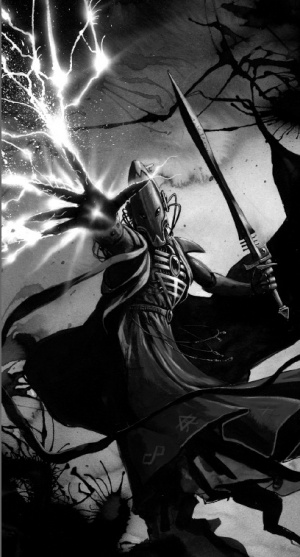 As the Eldar are a psychically sensitive race, they possess an inner strength to develop their powers in extraordinary ways with such individuals becoming Seers.[2] There are many divisions within the Path of the Seer with most being peaceful.[1] The vast majority of their number are unable to develop their powers in any militarily useful way. Whilst still able to fight alongside Guardian Squads, their powers are not used in anger and so they fight in a manner similar to others on the Eldar Path.[3] Some among their number develop their powers of prediction far beyond others of their kind with these more powerful individuals becoming Warlocks. They are able to focus their energies in destructive as well as creative ways as they can send psychic blasts that are sent from their mind.[2] These are the more bellicose and aggressive of their comrades who learn the runes of battle as well as the use of force weapons. Of all the Seers, the Warlocks are the most respected and their potency is only second to that of the Farseers. Warlocks are Seers who have walked down the Path of the Warrior and it is their previous experience as warriors that allows them to control their destructive impulses in battle.[1] Their previous experience in combat allows them to develop their combative psychic powers.[3]

The enclosing helmets worn by Warlocks are kept in the shrines of the Warrior Aspects and only don their warrior-self by returning to their old shrine whereupon they receive the helmet from an Exarch. This was part of a blood ritual of the Aspect Warrior with Warlocks representing the deadly combination of warrior and seer. When the Eldar go to war, their warriors are often accompanied by Warlocks who use their psychic might to not only shield their comrades but to bring destruction on their enemies. Few Psykers of other races can match the power of a Warlock, which is one of the main reasons for their armies' success and why other races rarely wish to antagonise the Eldar.[1] During times of war when Aspect Warriors rush to their shrine to prepare, a Seer can also accompany them to their old Warrior Aspect. Whilst no longer serving on the Path of the Warrior, they are welcomed as a brother and invited to join in the ritual. However, when called upon to wear a mask, these Seers are offered the special Warlock mask from the shrine and only accept if they feel able to fight. By accepting, they create a two-fold division within their mind that creates their self and the warrior. This can only be accomplished if they have prior experience in being an Aspect Warrior though they can always refuse the offer, which does not bring any shame on them.[3]

Besides leading Guardians, Warlocks sometimes form the bodyguard of a Farseer. Farseers are Seers who have lost themselves upon the Path of the Seer and will continue upon it until their death.[Needs Citation]Spiritseers are Warlocks who have specialized themselves in handling Wraithguards and Wraithlords.[Needs Citation]

They are often equipped with psychically attuned Witch Blades, the helix-shaped matrices of which allow their user to channel their own energies.[2] These powerful force weapons writhe and twist with living runes that focus their power into destructive energy.[1] Warlocks wear Rune Armour that consists of breast-plates, bangles and other ornaments that are made of wraithbone. The runic shapes are interwoven within the spirit stones, which creates an energised psychic field that protects their wearer from harm.[3]

A Warlock on an Eldar Jetbike is called a Warlock Skyrunner.[7]