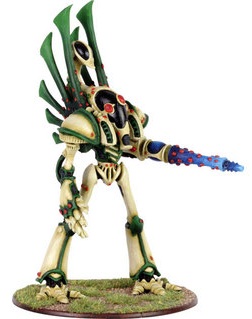 A Warlock Titan is a rare variant of the Phantom Titan[2] whose Wraithbone core contains the spirits of mighty Seers and Warlocks.[1]

The souls of these dead psykers can merger their psychic powers, amplified by the Titan's wraithbone structure, and combine with the smooth agility and sophisticated technology of the Eldar to create the pinnacle of psychic engineering.[1][3]

The psychic abilities of a Warlock Titan are immense and manifold. Its witch sight allows the Titan to see the ebb and flow of time, not only to foresee its immediate future and any potential dangers but to also look ahead into the possible futures, allowing it to move in perfect synchronization with the threads of fate. It can also twist together those threads so that doom more readily finds its enemy, resulting in cannon shots and even laser beams changing course to strike them, and it can give a mighty psychic roar which heartens allies and puts fear into the hearts of even the fearless. The psychic energy crackling through the Warlock Titan's body can ward off blows, instantly destroy Greater Daemons in close combat, and give power to its more feared weapon, the Psychic Lance.[3]

Besides the Lance the Warlock Titan is also armed with twin missile launchers and either a Pulsar or Titan-class Power Fist, and is protected by reinforced armouring and a Holo-field emitted from projectors mounted on its wings.[1]